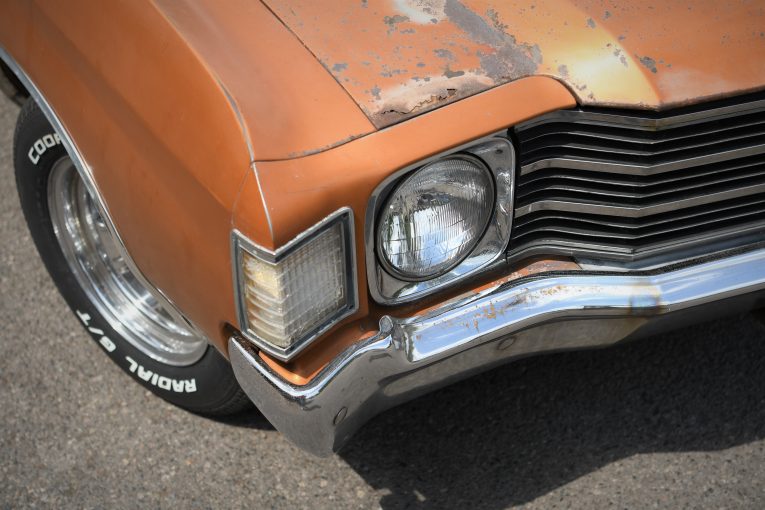 Rust never sleeps, so Neil Young told us back in the late-’70s. He was making a point, in inimitably ambiguous style, about the transitory nature of rock ‘n’ roll, and indeed the habit we all fall into of ignoring things that aren’t directly influencing our day-to-day realities. Think of the old Jag your disreputable uncle left abandoned in the corner of the car park at the Dog and Duck, slowly and inexorably returning itself to the elements from whence it came. The car sits forgotten, expiring steadily on its own terms, unloved and beyond redemption. Such is the way with ageing metal across the globe. Several time-zones away, the gentle chirrup of crickets as the milky orange sun peeps over the horizon; the delicate beads of dew on the rushes, mirroring those collecting on the grand haunches of early-1970s Detroit steel. Time creaks along. Slowly, barely mattering at all, the mighty orb warms away the moisture and sets about baking the abandoned hulk, as slinking coyotes and wild turkeys amble past. The sun goes down on Massachusetts. The crickets resume their staccato symphony. The cycle starts anew. This is how patina is earned. Sure, it’s easy enough to strip your paint off with Nitromors, pee over the panels to accelerate the corrosion and then lacquer over the top to seal the rust in, but what you’re seeing here is more honest, it has tales to tell. And there could well have been every chance that this patination would have been allowed to follow its natural course to the inevitable conclusion, had it not been for an ambitious Brit by the name of George – otherwise known as ‘Splitty456’ on the popular Retro Rides forum. George is a man with more than a few cool projects under his belt, most notably a B-reg Honda Civic (his first car) with a B16 engine swap, an E21 BMW that’s enjoying all manner of in-depth engineering work to get an S54 motor in there, and a Mitsubishi Starion which for a time acted as a ‘sensible’ daily driver. An eclectic mix indeed – so how did this Chevrolet Chevelle Malibu enter the frame? Well, having fixed up and sold on a couple of his retro projects in order to fund a house deposit, George found himself hankering after an old car to play with. It’s like an addiction really, isn’t it? You may sell off the projects, but you still need that sweet, sweet fix.

He’d always kinda fancied the idea of buying a massive slab of Americana, but the prices had always been too full-fat and meaty. However, as a natural lateral thinker, George began to investigate the possibility of importing a car from the States himself, and the further he ambled down that boulevard of thought, the brighter the lights on the horizon became. It helped that he wasn’t overly fussy about what sort of car he wanted to find; there were a great many Stateside classics on George’s wishlist, and after browsing endless classifieds he decided to narrow the search down to the ’68-’72 GM A-body platform, encompassing the Pontiac Le Mans, Oldsmobile Cutlass, Buick Skylark and Chevrolet Chevelle. There are still oodles of A-bodies on the market in the States, situated at various points along the dishevelment axis, and of course the aftermarket support in terms of parts and upgrades is superb; after all, these cars are iconic elements of the very fabric of a nation.

And so, after much searching, George found this car: a ’72 Chevelle Malibu. Now, the eagle-eyed among you will have noticed that it’s a four-door. This actually puts in quite an interesting position as a used proposition these days; after all, two-doors were always the desirable model in the muscle car era, and these were generally the cars that got cherished and saved, with their more-door brethren invariably ending up at the breaker’s yard. Sometimes, however, just sometimes, a four-door slips through the cracks, escapes the reaper, and is granted a second chance. It’s also worth highlighting that the extra doors do nothing to detract from the car’s muscular profile; a true pillarless effort, it looks properly purposeful regardless of the extra points of entry. This particular car is doubly ‘undesirable’ (in the sense that values are kept low, at least) in that it was built in the first year of unleaded fuel and net power ratings, meaning that its 302ci (5.0-litre) V8 only manages to wheeze out 140bhp. Or it did forty-nine years ago, some of those ponies may well have galloped since. But the aim of this endeavour was never to acquire a big-budget drag-strip hero. George wanted something fun to get his hands dirty with… and, in the style of all the most compelling TV shows, there was a deadline. Specifically, the Retro Rides Weekender on the last weekend of May. Which made things pretty interesting as, when the deal was done on the Chevelle in January, George had no idea what the car would really be like or, indeed, when he’d actually get to take delivery. What makes such things particularly fun these days is that, with all the confusion of Covid and Brexit exacerbating the usual inherent complexities, the whole endeavour was an almighty stab in the dark. Sure, the car would arrive in the UK at some point, but when? George had been given a rough estimate of the second week of April, but with the day rapidly approaching and no word from the shippers on the UK side, the Weekender deadline was looking increasingly unlikely. However, checking his email’s junk folder one day, he happened upon half a dozen messages saying that they had his car, it had cleared customs, and was due to be unloaded from the container within hours. Exciting stuff! So George paid the fees and customs charges and hightailed it to the shippers’ facility in Milton Keynes. (He used CFR Rinkens for shipping, whose UK agent is ShipMyCar; the cost of transporting the car from Massachusetts to New Jersey to Milton Keynes was around £1,650.) And there, laid out gloriously before him, was his bought-sight-unseen more-door A-body.

It had been advertised as a running and driving car; the shippers hadn’t been able to get it working, but George threw some fuel in and it fired up happily enough. A quick trip around the block confirmed that the transmission worked, so did the brakes, all the lights were good – it seemed pretty OK. Just a simple case of getting it registered, then, and cruising to glory? Well, no – things are seldom that simple with old cars, are they? Picking through the Chevelle, George started to draw up a shortlist of areas to address. He found a wheel bearing that needed replacing, and the weatherstripping around the side windows had crumbled away to dust; impressively this is still available as a new part, although it does require digging deep! And then, upon opening the boot, a larger task presented itself: the boot floor was full-on Flintstones spec, requiring a new floor panel plus fabrication to the awkward shapes to make it all water-tight. And of course, as well as making the car solid, George had to make it cool – so a set of Cragar 390 wheels were acquired, shod in oh-so-retro lettered tyres. With less than a week to go before the show, the bulk of the work had been carried out and George had a glimmer of hope in his heart… however, there was no sign of the logbook, and this pivotal detail was becoming a make-or-break affair. He was waiting by the letterbox every day like an obedient and slightly edgy Labrador. To save himself from twiddling his thumbs until they came loose, he busied himself with changing the diff oil, fitting some wing mirrors, addressing the engine oil and the belts and the wheel bearings… So did the Chevelle make it to the show? Of course it did – the eagle-eyed will have already spotted that these photos were taken in the iconic Goodwood paddocks. The logbook squeaked in just in time for George to get some number plates made up, and the plucky Malibu cruised to success in flawless and faultless style. And you can be damn sure he’s bought this thing to be used; while the car lazed in the show paddocks on the Saturday, Sunday was spent hooning around the autosolo track, something a four-door Chevelle was never designed to do. But this story is all about second chances, about doing the unexpected simply because life’s too short. Rust never sleeps, but neither do ambition or adventure.