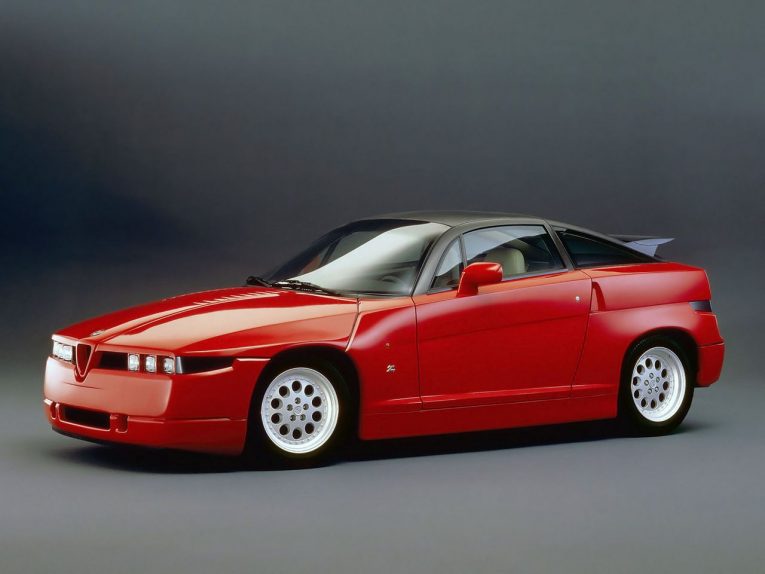 The anthropomorphism of the automobile operates on a variety of levels, and it’s not always something we have total control over. Applying human or animalistic characteristics to cars happens all over the place, whether it be as simple as an owner referring to their motor as ‘he’ or ‘she’, or giving it a name, to genuinely feeling that it’s one of the family. The car you’re seeing here, however, is at totally the opposite end of the spectrum to your grandma calling her Morris Minor ‘Doris’ and bidding it ‘nighty-night’ when she closes the garage door. No, the Alfa Romeo SZ’s nickname chose itself by virtue of its, er, challenging aesthetics. To aficionados and terrified bystanders alike, this is the car universally referred to as ‘Il Mostro’: the monster. It’s perhaps a little unfair. Yes, the SZ is a peculiar-looking thing, but its designed-with-a-set-square angles have mellowed somewhat with the passage of a few decades. Folk do say that beauty is in the eye of the beholder, and while certain wags may be immovable from their position that in this particular case it’s actually in the eye of the beer-holder, a more charitable outlook would be that the quirky little coupe has transcended into the realm of the oddball classic, the like of which simply wouldn’t make it through a focus group these days. And hey, it’s not exactly a SsangYong Rodius, is it? The French designer Robert Opron was responsible for those dramatic Lego-like lines. Perhaps best known for his mould-breaking penmanship for Citroën – his work as their design chief included the nouveau visage facelift for the DS, the spaceship-like SM, and the magnificently odd CX – he was heading up the ‘advanced studies’ area at Fiat’s Centro Stile in the late-eighties when the notion of a belligerently jarring sports car dropped onto his desk. What resulted was the ES-30, a prototype which was unveiled to general shock and awe at the 1989 Geneva Motor Show. A super-rapid development programme saw the car launched to market in the twinkling of an eye, badged Alfa Romeo SZ – the initials standing for Sprint Zagato.

And therein lies the inherent mischief and tomfoolery of the model. You see, this wasn’t really a Zagato car at all, not in the traditional sense. Marque die-hards immediately spotted the flat roof and were quick to point out the absence of the trademark double-bubble, but the fact of the matter was that Zagato had no hand in designing it. It was Opron’s vision at Centro Stile, his sketches passed to a junior stylist by the name of Antonio Castellana for fine-tuning. Zagato simply built it. It has to be said that they made an interesting job of it too. While the styling is distinctly polarising, the actual construct is also worthy of note. You’d expect a composite body to be motorsport-lightweight and, while an all-in kerbweight of c.1,200kg sounds sylph-like in modern terms, it was actually surprisingly hefty for such a compact form. The fit-and-finish was rather agricultural too, with huge panel gaps visible outside and all sorts of exposed and unfinished surfaces lurking in the joins, the door shuts, inside the boot… whereas the green bonding visible in a Ferrari F40 is endearingly focused, the caravan-like roughness of the SZ’s intimate areas seems a little unrefined – particularly in a car that sold for £35k when new, which was near-enough Porsche 911 Turbo money. Still, none of these blots on its copybook matter a jot when you consider the character of the thing. This is a deliberately weird car, with a fiery motorsport soul and a couture approach to uniqueness. No two examples are the same, as they were all hand-finished and built more with passion than a keen eye on any rulebook. And while 207bhp from its Busso 3.0-litre V6 may not sound hair-on-fire rapid (especially considering the seven-second lope to 62mph), this is a car defined by more than mere on-paper numbers. Yes, it really did have motorsport stirred into its base elements; the steel skeleton chassis was pinched from the Group A Alfa 75 Touring Car, as was the suspension setup which was then re-engineered by the Fiat/Lancia works rally team to incorporate a driver-adjustable Koni hydraulic system. The chassis was quite something; those staggered 16” Speedline split-rims boasted some truly fat rubber (205-section Pirelli P-Zeros on the fronts, 225s out back), and the remarkable grip meant that the scrappy SZ could pull as much as 1.4 G in the corners. It goaded the driver on to exploit every iota of its grunt – which, given the glorious sound of the Busso motor, was no great hardship. All of this engineering prowess could later be enjoyed with the wind in your hair as well; after a production run of 1,036 SZs from 1989-91, the RZ debuted in 1992. The Roadster Zagato appeared identical save for its missing roof – in truth, every panel was different except for the front wings and the boot – and buyers could choose black or yellow paint if they were feeling extravagant. (The SZ had only been available in red with a tan interior, there were no other options… unless you were Andrea Zagato, who got a black one.) 252 drop-tops were built before the Zagato factory went into receivership in 1994, a further 32 being assembled under the watchful eye of the receivers… an ignominious end, for sure, although nothing about the SZ/RZ story was in any way conventional or predictable. A cynic may argue that the SZ was more characterised by its flaws than its achievements. It was, to be frank, a pretty barmy creation in a number of respects. The driving position is completely daft, as the seats are very high up and not height-adjustable, while that soft leather Momo wheel is weirdly offset to the centre of the car. The SZ could have happily been a 2+2, but Alfa Romeo decided instead to simply fit some rudimentary luggage straps in the rear. The odd drop-down bootlid hid a space-saver spare, but if you did find yourself in the position to be changing a wheel roadside, the Speedlines wouldn’t fit in the tiny boot so your flat tyre would be coming in the cabin with you. The speedo needle bounces around like a 205 GTI’s, meaning that you have to take a mental average of how fast you might be going at any given point. The floating rear spoiler cuts right through your rear-view field of vision. And if you leave the car outside in the frost, the paint will microblister like a teenage chicken shop employee’s forehead, leading to a hideously complicated and expensive repaint. But none of that matters. Because this car is not out to please you. It is Il Mostro, it dictates the rules and certainly doesn’t need your approval. It has one of the all-time great engines, a phenomenal chassis, six evil eyes, and the sort of looks that make small children run in fear. This is a truly bizarre slice of Italian automotive history. And what’s most alluring about the SZ today is that sale prices (on the rare occasions they come to market) tend to be around the £40-50k mark. That’s 5% of the value of the slightly-less-rare Ferrari F40, with a shared ethos and no less impact. Wouldn’t you like to scare yourself a little bit?