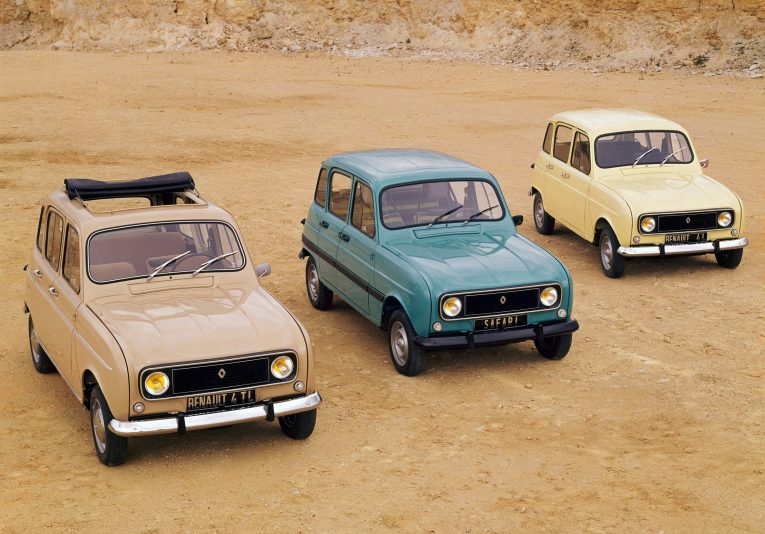 If you have a French fancy for something fun and usable but your budget is a little more village boulangerie than Paris boutique then the “Quatrelle” could be just the car for you, but before you hand over those hard-earned Euros there are five things you should know.

Quintessentially French the Renault 4 is both a practical and affordable classic. A proper French icon nowadays it’s an all-encompassing car that is both fun and easy to maintain. Launched in 1961 it was Renault’s answer to Citroen’s 2CV and a replacement for its own 4CV and is recognised as the first mass produced hatchback, going on to sell in the millions all over the world, a testament to its design and usability. Intended as a car for everyone and with a low price tag the Renault 4 is a true success story. It’s rare nowadays to be able to find such an iconic classic for only a few thousand pounds and while you may have to root through some lemons to find a decent example the Renault 4 is such a charmer that it’s well worth the effort. All versions are powered by a water cooled four-cylinder engine with either a three or four-speed manual transmission depending on the year. Early versions of the car carry the more classic aesthetic but they are much more scarce on the second hand market and can be a little too agricultural for some. Post 1968 cars are fitted with more user-friendly engines as well as four-speed gearboxes and 12 volt electrics and are generally easier to live with day to day. The later GTL models have the largest engine at 1.1litres but most motors are plenty powerful enough to keep up in today’s traffic due to the car’s low curb weight and although the range is peppered with special edition variants, including a 4X4 and van derivative (the Sinpar and Fourgonnette respectively) most changes were limited to trim and equipment additions. With those time-honoured Gallic looks the Renault 4 is instantly recognisable and is truly enjoyable to drive and thanks to it’s simplicity there is little to go wrong, but before you fork out the Francs for this convivial classic there are five things you need to know.

When it comes to picking your Renault 4 it is much more prudent to find one with a solid chassis than to worry about engine size or mileage as this is the car’s Achilles heel. Check for rust or poor repairs where the rear suspension attaches to the chassis as well as the inner mounts. Any rot needs to be cut out and replaced with fresh metal as patch repairs will only postpone it’s inevitable return. Make sure that any welding work has been carried out properly and to a high standard. Brand new galvanised chassis are available and companies such as Renospeed can help with restoration work but it’s much less hassle to find a good example in the first place. As with most cars of this age rusty bodywork is a perpetual concern but body panels are readily available and if you’re handy with a welding torch then most repairs can be done at home. Wings can retain moisture so check these thoroughly. They are bolt on affairs though so are easy to replace if needs be and it’s a similar story with the bottom edge of the windscreen so check here for bubbling paint – a sure sign that corrosion lies underneath. The usual spots like wheel arches and sills should also be scrutinised. The main thing is to find one that’s solid structurally. Anything else can be fixed relatively cheaply and easily. It’s basic and functional inside the Renault 4 but the dash mounted gear lever adds a little quirky French charm to the interior. These are fairly utilitarian vehicles so check for any damage to material, plastics and trim but everything is pretty robust and hard-wearing so there shouldn’t be any real issues here. Earlier vinyl seats are tougher than the later GTL cloth covered ones but replacement items can be found from French and German suppliers along with other trim pieces such as mats and door cards and the driver and passenger seats are identical and therefore interchangeable.  Interior for earlier models is a lot harder to come by however so bear this in mind. You could spend hours sifting through online auction sites and forums, some of which will inevitably be in French only to emerge empty handed and a little despondent. Independent upholstery companies may be a better bet but bills could very quickly escalate. Only cars produced after 1972 had rear seatbelts so take this into account if you have “les enfants” and the car is going to be a classic for the whole family to enjoy. All versions of the water cooled OHV inline four-banger fitted to the Renault 4 are strong and hardy with sizes ranging from 603cc to 1108cc all of which can be run on unleaded fuel but it is wise to use an additive. Power ranges from 22.5BHP to a not particularly earth-shattering 34BHP so concerns about speeding tickets or dreams of high speed street races are pretty much non-existent. Oil changes should still be regularly carried out every 5000 miles or so and evidence of a poorly maintained motor will manifest in the form of sludge build up on the valve gear. This is easily inspected too as the valve gear is visible when removing the oil filler cap. Although fitted with a cooling system that didn’t require any topping up as it was designed to last the life of the vehicle it is still shrewd to keep the coolant fresh with regular flushes to prevent overheating and engine liner seal issues. Rattly timing chains are normal and shouldn’t be cause for concern and they rarely fail. Even if an engine does give up the ghost though popping in a cheaply sourced replacement is a doddle and shouldn’t necessarily put off a potential purchase if the rest of the car is in good, solid condition.

Much like the 2CV it was built to compete with, the Renault 4 has almost scary amounts of body roll in the corners. This can be a little disconcerting for those who are used to cars with more planted handling but it’s a natural feature of the car and is nothing to worry about and the ride is really very smooth and comfortable, designed as it was to even out rubbish French black-top. There is a somewhat typical French insouciance in the way it drives that really does appeal. The rear suspension fitted to the Renault 4 is a simple but interesting setup. The car utilises torsion bars fitted transversely (combined with hydraulic shock absorbers) which means that the wheel base on the left of the car is shorter than that on the right as the rear wheels are not directly opposite one another. The only downside is that any adjustment to these torsion bars requires a special tool from Renault but having said that the suspension can be modified easily this way to provide increased ground clearance for more “rural” driving.

Driveshaft gaiters can easily split which leads to the ingress of dirt and grime which will obviously cause untimely wear so check these along with front suspension ball joints, both of which are cheap and easy to fix.

The anchors on the Renault 4 are simple and capable enough but do remember they are old. Compared to modern brakes they are pretty antiquated but they do stop the car effectively. There’s little to go wrong here but do check the pipes for corrosion a well as the master cylinder for any leaks. It was historically a drums-all-round affair until 1983 when the GTL was treated to discs at the front. Positively space-age. Replacing discs is an easy enough task for anybody with basic tools and it’s a similar story with brake shoes where drums are fitted. It is possible to carry out a front disc conversion but due to the performance (or lack thereof) of these cars it’s not really worth it as the drums are more than up to the job. A point to note with the TL versions is the caged nuts holding the handbrake on tend to come loose and are best off being replaced with better quality thread lock nuts.