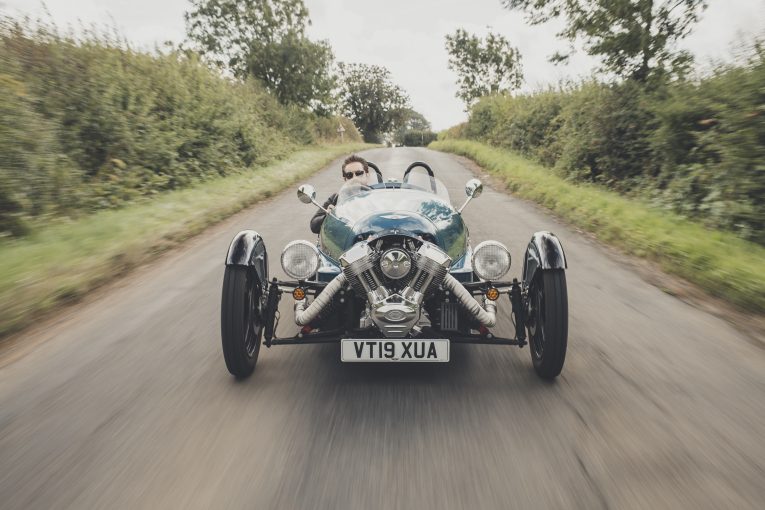 The phrase ‘bike-engined car’ usually conjures images of screaming, rev-happy custom hooligans. A hillclimber Mini with a Hayabusa engine, perhaps, or a Hillman Imp with a Gixxer in the back. But in the case of the Morgan 3-Wheeler, it’s a thudding fighter plane with wheels, clamouring for dogfights in the bemused modern traffic. The craftsmen and artisans at Morgan have always been endearingly eccentric. It’s the British manufacturer of which we should perhaps be most proud; a stoic, irreplaceable stalwart of the vintage motoring scene, whose Malvern home encompasses a dedicated fusion of keenly observed traditional methods and bang-up-to-date innovation. Their homely factory has a whiff of old-timey splendour in the air – set on a gradual slope that gives the manufacturing process a natural flow, it trickles down from chassis room to body shop, into the wood shop and across the yard into paint and trim, the whole thing oozing very organically. Much like any Morgan car, in fact. These aren’t frugal grocery-getters or sensible commuters, but neither are they flashy accessories. You don’t buy a Morgan because you need one, but because you want one. It’s this mindset that they tapped into in relaunching the 3-Wheeler concept back in 2012. The original V-twin 3-Wheelers were produced from 1911-39, having tiller steering and band brakes along with 8bhp JAP motorcycle engines. The modern variant takes this template and makes sense of it: the jewel in the crown is the engine – a 2.0-litre V-Twin from American custom-motorcycle legends S&S. Just think about those numbers for a moment: two litres, two cylinders. The colossal pistons thud like jungle drums, spitting unseemly noises through those open pipes. 80bhp at the rear wheel is more than enough with a kerb weight of just 550kg, and it’s largely thanks to this that the 3-Wheeler’s truly become a modern icon. Not just a bizarre curio, but a genuinely entertaining one. A car that nobody needs, but everybody kinda wants.

There are two myths we need to dispel about the Morgan brand. The first is the much-misquoted idea that Morgans have chassis made of wood. They don’t. They’re made of solid, sturdy metal – it’s the body frame of the various four-wheeled tourers that’s wooden, with the hand-beaten panels attached around it. The second is the notion that Morgans are sedate and old-fashioned. Sure, the methods of construction are proudly traditional (the clamp that forms the roadsters’ wooden rear arch curve has been in continuous use since the sixties, for example), but the performance is thoroughly of this age. The 3-Wheeler, of course, isn’t made of wood at all. It’s effectively a large cigar tube with a pop-popping V-twin on the nose, two oversized bicycle wheels at the front and a single belt-driven wheel just behind your backside. It’s a magnificently silly thing, and that’s precisely why it’s so lovable. It positively oozes heritage and provenance too; after all, this is the format Morgan cut their teeth on back before World War One, and while it’s modernised in the 21st-century version, the ethos and the layout is the same. It’s just a tiny car with two seats, an engine hanging off the front, and drive going to the rear. There’s nothing else on today’s market quite like it.

And to drive? Well, it’s completely insane. It’s like climbing into your bathtub in a fat-suit, and if you were so inclined you could reach out and strike a match on the tarmac. This car is an absurd little toy, and I mean that with the utmost reverence and respect. Harking back to the early days of Morgan’s three-wheeled cyclecars, this takes the classic formula and contemporises it, employing the hunky S&S two-pot to perch on the nose like some kind of shiny trophy. The aero influences are many and obvious, from the open side pipes to the aircraft-spec gauges and the flip-up cover of the start button. Morgan has made it almost sensible for the modern age as well, reworking the cooling system to make the thing usable in today’s urban traffic. It even has heated seats.
OK, ‘sensible’ is a relative term. Once I’ve wiggled under the steering wheel and pulled across the centrally mounted seatbelt, plugging it in by my right thigh, I’m basically sitting on the floor. Thumbing the starter, the V-twin jumps into life and settles into a rhythmic brap-brap-brap idle. The clutch is light and, combined with that five-speeder – sourced from a Mazda MX-5 – makes pulling away seem almost civilised… until I get to the first junction, and realise that the turning circle is so obscenely vast, my nippy exit becomes a five-point turn. Oops. Still, at least it’s an extremely conspicuous car and everybody’s watching…

The way to circumvent this, I soon discover, is to steer on the throttle. That single rear wheel just loves to break traction, so it quickly becomes second nature to leave junctions and side-turnings in a controlled low-speed slide. This also has the effect of making the pilot feel like some kind of driving hero. The easy-to-exploit 3-Wheeler really does flatter even the most ham-fisted operative.
Passers-by gawp as I tear past, sounding like a Spitfire (the car, not me, although it’s hard not to join in), bouncing off the rev limiter somewhere between 5- and 6k (maybe, ish – you needn’t really look at the dials, there’s no point), grinning like Bertie Wooster. As the countryside opens up, the bobbing front wheels, bicycle-thin, lock up just slightly as I lean on the brakes into a tight right-hander, just to remind me not to take the mickey; a warning I immediately forget to heed as I shift down, plant the throttle, and snake off up the road in a haze of tortured rubber and tantalised hydrocarbons. What a splendidly silly creation this is. As I pull up to a halt back at the factory and click the fly-off handbrake into place, the realisation dawns that nothing else I do today can possibly be as entertaining. It’s a machine of pure joy, and pure joy is an emotion distinctly lacking in modern life these days.

I check my watch. Yes, there’s some more time to play. So I rev the V-twin, its machine-gun staccato bouncing off the trees, and head out for just a little more mischief. Pointless drives are, after all, precisely what this wonderfully pointless car is for.