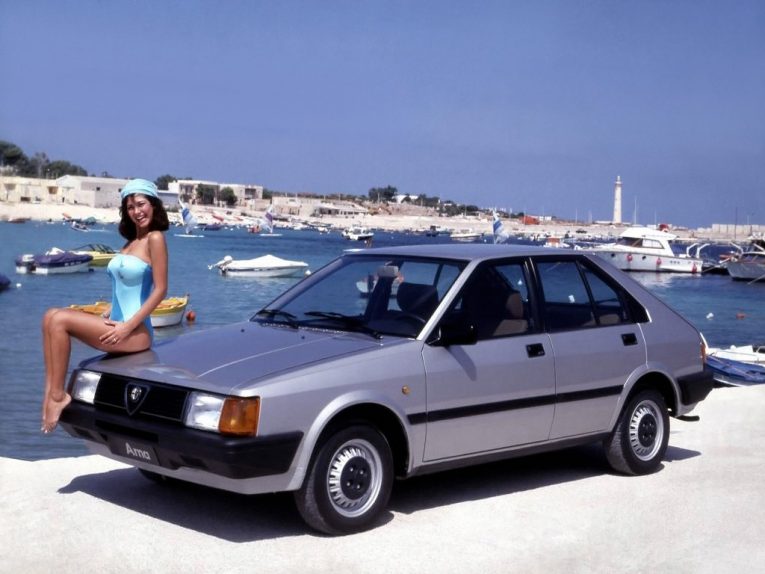 The coming together of two things can often be a good thing. Take the mobile phone and the camera, or smart TVs, or wearing a shirt with shorts. Taking two individual ideas and bonding them can create revolutionary, amazing things. But only if you mix the correct elements. For example, the Apple computer, that took all the components of a conventional computer, merging them into one, that’s very good. But if you were to, say, mix your microwave with your shower, that would be bad.

This merging train of thought is commonplace in the automotive world, too. And for the most part, the automotive world gets it right. There’s the current Toyota Supra and BMW Z4, or the Toyota GT86 and the Subaru BRZ. Those are great examples. The old Mazda 121/Ford Fiesta amalgamation was less exciting, but crucially, the two cars that were the product of the merging of two brands were at least passable. The car we’re looking at here, namely the Alfa Romeo Arna, was not passable. Not even in the slightest. In October of 1980, Alfa Romeo and Nissan announced to the world that they would be partnering up to build a new car. The Italian Government was even backing the partnership. This was a huge worry for the European carmakers. They were already on edge thanks to the outstanding reliability and build quality of Japan’s offerings, so this proposed merger concerned them. It was the coming together of those qualities, but with added Italian style. It had the potential to hugely disrupt the market. And when you consider that during this time, France had a ban on Japanese cars so as to support its own offerings, you can see why the European brands were worried. This had Trojan Horse written all over it – the Japanese were going to steal the sales by sliding into the market on the European Alfa Romeo name. A new plan to build the new car was constructed in Pratola Serra, near Naples. But it was kept under lock and key – nobody knew what was being developed there. For that, the motoring world had to wait, breath held, until the 1983 Frankfurt Motor Show. It was there that Nissan and Alfa Romeo unveiled their creation to the expectant press and industry big wigs. And as the covers were pulled back, the crowd offered a stunned silence. And then it laughed. And when the technical details of this new car, the Arna (short for Alfa Romeo Nissan Autoveicli) the crowd laughed some more. Nissan and Alfa Romeo had got it wrong, so very, very wrong.

The concerns were based around the two producing a car with Italian style and Japanese reliability. What they’d done, however, is build a car the other way around. It looked like a Nissan, but it was built by the Italians and was powered by Alfa Romeo engines. It was terrible.

Sold through Alfa Romeo dealers, the Italian carmaker was confident the Arna would be the perfect car to complement its range. There was a gap left by the now upmarket 33, and the Arna was just the car it needed. Or not. You see, it was a terrible car. The Japanese parts were shipped into Italy, and it was there that things started to go wrong. The build quality was awful, even if the base parts weren’t. In culinary terms, they were being given a steak only to burn it. If they had screwed the Arna together well, that would have been something, but they didn’t. The Arna was a rattly, clunky old thing. The fact it unashamedly looked like a Nissan hurt sales too. The fact it looked that way, but had none of the Nissan qualities meant people were even more put off, it wasn’t just a bad car, it was a bad Japanese car, and why would anyone buy that?

To compound matters, the Arna retained none of the redeeming features of the Nissan Cherry, which is what the body basically was. The Arna had the panels, but that was it. The electrics were Italian, and with it, woefully unreliable. The engines were Italian, and while they were charming thanks to being flat-four in design, they were again terribly unreliable. The front suspension was also from Alfa and offered little in the way for driver reward. The Arna did retain the Cherry’s independent rear suspension, but it was too little on a car that was too bad.

The partnership wasn’t fooling the buyers, who voted with their wallets and ignored the offering completely. It was a car that took none of the positives of the merged cars, and instead exploited the negatives. It made no sense. By 1986, Alfa’s parent company, the government-owned Istituto per la Ricostruzione Industriale was losing money on the deal hand over fist, and as such, put Alfa Romeo up for sale. Fiat bought the struggling company, but not without actioning a few things first. Fiat bosses wanted nothing to do with the Arna, shutting down production immediately. They also ended the partnership with Nissan and instead went back to the Alfa Romeo 33 and focused on making that the company’s key model. In 1987, production of the Arna came to a close with 53,047 Arnas having been produced.

Nowadays, the Arna is almost extinct, with numbers in the UK rumoured to be below ten. It exists mainly as a cautionary tale in the book of automotive history. It’s a car known for being disastrous, an example of what not to do. In some respects, it was an important car because without such failures, how do we learn? It’s perhaps ironic then, that this planned saviour of Alfa Romeo altered the company’s future onto today’s largely successful trajectory by failing harder than almost any other car.