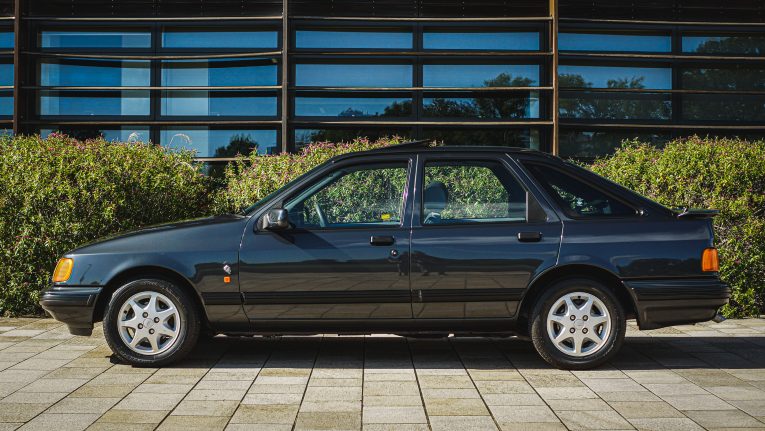 The old Ford world is a tribal one, and one in which the name ‘RS Cosworth’ will be defended to the hilt. People will tell you that the Cosworth cars represented the apex of Ford’s performance curve, and we wouldn’t be inclined to disagree. The Cosworth cars, with their turbocharged, sixteen-valve engines were indeed a force to be reckoned with. However, they were not the be all, end all of performance with a blue oval. We also had the XR cars. Ford was keen to have the RS Cosworth and other RS models be seen as ‘every man’ performance cars, but the reality is that these cars represented the top of Dagenham’s totem pole. Never ones to miss an opportunity, Ford came up with the XR range of cars, starting with the XR2 which was based on the Fiesta and of course, the XR3 based on the Escort. And of course, this branding language landed on the desk of the Sierra’s design team, too. And thus we had the XR4i.

The XR cars were, at their core, a clever demonstration of what marketing could do. In terms of power, they were nowhere near as angry as the RS cars, which were of course turbocharged. Instead, the XR models made their case by being a larger than average capacity to begin with (the Mk1 XR2 was a 1,597cc, as was the XR3 – big engines for small cars). Then later, they relied heavily on being injection. We take it for granted now, but in the ‘80s, fuel injection was synonymous with performance. Add in some red stripes, some red piping on the seats, a bit of a body kit in some cases and of course, the obligatory alloy wheels and you had the recipe for a sales success. For those who couldn’t stretch to the RS models of the time, there was an attractive alternative right there in the same dealership. A brilliant move by Ford.

So what of the car we’re looking at here, namely the XR4x4? Well, the Sierra took a slightly different tack than the rest of the XR range. When it was launched, with press photos of it parked triumphantly in front of the Space Shuttle, it was a unique model. The other XRs weren’t. A Ford Escort shell, at the very beginning of the assembly line, could end up as an 1100 Popular Plus, or an XR3i. The core structure didn’t matter. But that wasn’t the case for the Sierra. It was a bigger, more expensive proposition, so Ford decided to make the XR4i a three-door car. Logic would dictate, then, that the XR4i would use the three-door shell of the RS Cosworth, right? Well, sort of. The XR4i actually pre-dated the Cosworth. To distinguish the Cosworth from the XR4i, Ford cut out the chunky C pillars. The XR4i had a different body kit and was fitted it with a 2.8i Cologne V6 engine mated to a five-speed manual transmission. And of course, they fitted a suitably wild twin-tier spoiler. More of a hint of the future RS Cosworth than a copy.

Ford had high hopes for the XR4i, but they were hopes that would never be fulfilled. While Ford never went on record to say as much, the XR4i didn’t fly out of showrooms at the same rate as the Fiesta and Escort XRs. The biggest obstacle for the Sierra was not rival brands, but Ford itself. The big selling point of the XR4i was that it was a 2.8i V6. It was also a three-door. However, Ford already had that box ticked with a much better machine – namely the Ford Capri 2.8i. And while the Capri was ageing by this point, it was still popular enough to win eyes away from the XR4i. Ford had to think of something else, and that meant pushing the Sierra XR image further.

It was around this time that Audi was blowing minds with its quattro all-wheel drive system. It was a novel idea that many rival brands laughed off initially. After all, who would buy a four-wheel drive road car that wasn’t an actual off-roader? Then Audi hushed everyone by dominating the rallying world with its quattro system, and all of a sudden, we did indeed want all-wheel drive cars. But Audis were expensive. Ford saw an opportunity. Pairing up with Furguson, Ford’s Special Vehicle Engineering department, under the watchful eye of Rod Mansfield, developed a full-time all-wheel drive system. It was different to Audi’s, and somewhat more simple. But it was no less effective. In fact, some would go so far as to say it was better.

The system used a traditional gearbox which was mounted to a central, viscous differential. This then set power to the rear as was normal in a Sierra. The addition was the front differential, which received power which was then delivered to the front wheels. At low speeds, the all-important differential would distribute power at a ratio of 66% to the rear and 34% to the front. However, if the driver were to press on, the viscous fluid within the differential would firm up – think of it as a non-Newtonian liquid of sorts – and thus ‘lock’ the diff, sending power more evenly between the front and rear. No electronic management, no clever sensors. Just a diff full of clever goo. Add in the fact the engine sat further back than that of the Audi, and that the Audi ran with a permanent 50/50 power split and you can see why many favoured the Sierra. It was a flexible, changing system that worked in conjunction with how the car was being driven, rather than just working all the time at one setting. No diff locks, no additional switches or knobs. Just get in and go, let the car do the rest.

Ford first fitted the system to the XR4i three-door shell, and indeed, a number of left-hand drive versions of that car were built, but not many. In the end, Ford decided it would have greater appeal if it were fitted to a five-door car (and later, an estate). This was also a factor brought about by cost. To stop the XR4x4 from being prohibitively expensive, they had to strip it back. So ‘common five-door shell, no special body kit, no big spoiler, not even electric windows. It was sparse, but it could be, because the all-wheel drive system did the selling. As did the beefed up, lower suspension to better aid the all-wheel drive. Though of course, as the years rolled on and the car gained in popularity, the Sierra XR4x4 became a more refined product. It was given a face-lift in the mid 1980s, resulting in the car you see in the pictures here. It gained more kit, like ABS (which worked to further improve the drive of the car), alloys, electric windows, premium stereo and so on. It became a standout model in its own right. It was more than just an XR model of the Sierra. It was a huge advancement in vehicle technology and engineering, and it was an important milestone in the history of all-wheel drive. It might not have had the following of the Cosworth, but let us not forget that the Sapphire Cosworth was all-wheel drive after the XR4x4. It was the XR4x4 that paved the way. That car that created the demand. Sadly though the Sierra was a product of the ‘80s (though did live into the early ‘90s) and as such, had all the rust protection of, well, an ‘80s Ford. Add into the mix the fact that XR cars became almost impossible to insure due to theft, and you’re left with a car that very quickly fell by the wayside. That’s why, when one comes up, you need to capitalise on that opportunity and own it. Much like you can with the very car featured in this article, which is available via our auction site.

An underappreciated gem is the Ford Sierra XR4x4.