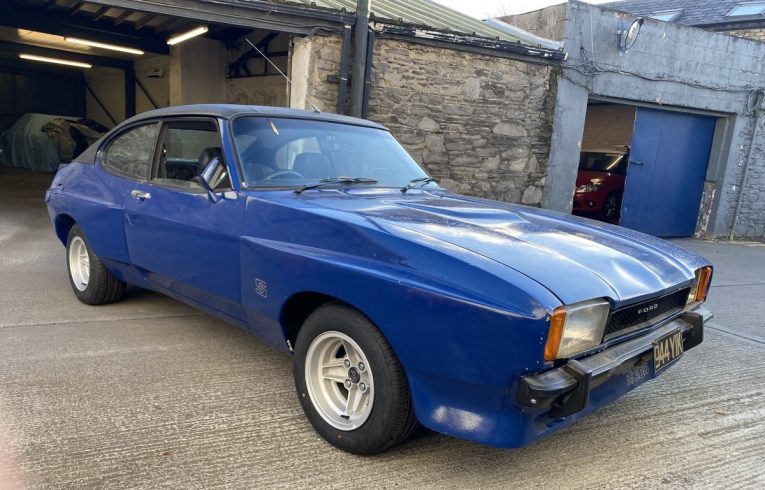 If you’re after a classic Ford, there are few as evocative as the Ford Capri. It was billed as the car you had always promised yourself, it was our Mustang. A little, British muscle car of sorts. Okay, so some of them were 1.3, but we’ll gloss over that. Let’s instead focus on the one we really wanted, namely the V6 cars. Okay, so it might not have been the eight-cylinder engine we found in the Mustang, but it was close enough, and ample for British roads. The Capri was, most definitely, the car to be seen in during the ‘70s and ‘80s. Shows like Minder and The Professionals etched the image of power-sliding Capris smashing through boxes into the very fabric of our brains. It was an exciting, brash, bold car that screamed fun. Until of course, it wasn’t. The hot hatch explosion of the ‘80s made the Capri uncool overnight. The growl of a V6 was no longer preferred, with the chatter of a turbocharged CVH taking the affection instead. Capris fell by the wayside, and were consigned in many cases to the knacker’s yard. Now though, the Capri has come full circle and is once again (and quite rightly) a very desirable machine. Especially when they’re fitted with Ford’s very angry X Pack body kit. Which leads us to…

What we have here is the rarest of the rare, namely a 1976 Mk2 Ford Capri 3.0S. The Mk2 is a rare car anyway, the 3.0S even rarer. But a ‘76? That’s very rare indeed. And the rare kudos doesn’t stop there, because this one wears the angry, wide and transformative X Pack body kit. Wide arched front and back, a deep chin spoiler, wide RS four-spoke wheels. It is one hell of a thing. It’s lived in Ireland all of its life. Bought as a standard 3.0S, the owner took the car back to the dealership in 1977 and had them fit the full RS X Pack kit. That meant wider front wings, wider rear wings, deep chin spoiler and those all-important 7×13 RS wheels. It was a kit that transformed the look of the car. And we might be biased as our Editor had a ‘76 3.0S, but the Mk2 is the best-looking Capri, and the best-looking X Pack version as a result. But that’s for you to decide.

This Capri has, according to the vendor, only covered 72,000. And thanks to the roads in Ireland not being subject to as much salt as those here, the car has been described as being largely solid. There is some work to do, but not nearly as much as you might think for an old Ford. It’s a very rare find, and a car that most definitely deserves to once again prowl the streets. Well, it’s not been on the road for a while and has instead been in dry storage. There is some rust to deal with, the interior is a bit ripe, the paint is shot and the engine has locked up according to the vendor. Apparently, the original owner chopped the car back in three years after the kit was fitted, and the dealer simply never sold it again. It was used as an ‘exhibit’ in the showroom, and was then put into storage. Weird, but there we go.

The rust is there, but is at a minimum. The passenger door has gone at the bottom, for example. But the inner wings, struts tops, scuttle and boot floor all look good. From what we can see in the pictures, the roof looks good (they rot out around the hinges) and the doors don’t seem to have dropped, so hopefully the A pillars are solid, too. There is some surface corrosion underneath, with some more serious rot on the left side, but nothing a semi-skilled metalworker couldn’t sort. It’s certainly not terminal, in fact, it’s probably more solid than some road-going examples in places.

The all-important body kit looks decent, too, though it does need some love in the looks department. No damage from what we can see, though. The rare wheels also look to be in good condition.

The interior is a bit tired, but it’s complete and looks like it would clean up without too much of a fight. The door cards are good, the headlining is excellent and the dash is in good order. The period additions like the Pioneer speakers in the back add to the timewarp factor!

The vendor states the engine has locked up, but why? Is it a result of just being sat, or is there something more sinister at play? It’ll need a rebuild either way, but it’s good to know what’s up going in.

It’s a Ford, and while the vendor has been brilliantly detailed in his listing and video, it still pays to have a look for yourself. Sills, pillars, boot hinges, floors, it all needs checking. If this car was indeed on display in a dealership for many years, there might be some interesting history to dig up. Plus, it would be wise to double check the legal side of things if you’re planning on taking the car out of the country.

Vinyl roofs are the devil’s playground. And by devil, we mean rust. It might look good, but under that black coating there could be a world of pain resulting from decades of trapped water. Check it. Press on the roof. Make sure it’s solid.

You can get reproduction wheels easily enough, but these wheels are genuine RS examples, and it would be a shame to have to break up the set to replace one or more with a copy. They look really good in the pictures, but be sure to give them a close look in person. Look for cracks, curb damage and corrosion. The Capri from The Professionals

There is only one thing you can do with this, and that’s strip it right back, banish any rust you find, paint the whole thing silver with a black roof and then live out your fantasies of being Bodie and/or Doyle. Yes, The Professionals drove a Mk2 X Pack Capri for a while, namely SOO636R. You could build a killer replica of that car, but unlike the others, yours would be a genuine, time-served X Pack. Imagine the kudos you’d get for that at car shows. Go on, you know it makes sense. Come in, three-seven and four-five, come in, we have a mission for you…