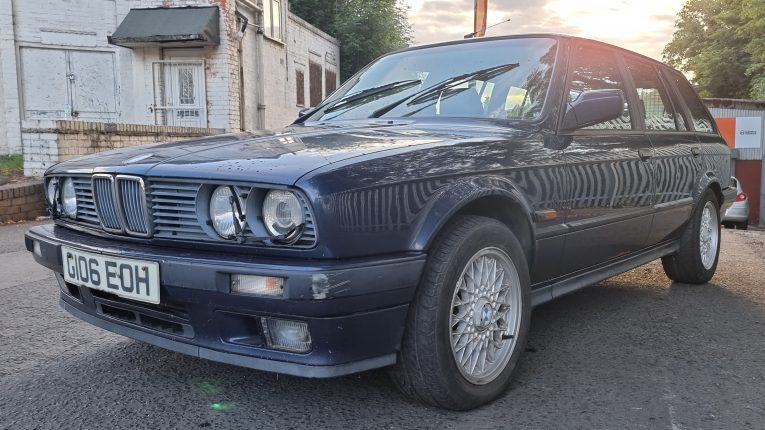 We love an estate here at Car and Classic, or ‘wagon’ if you’re from across the pond, and we especially have a soft spot for the E30 Touring – BMW’s second generation 3-Series and the first to be made available in estate form. There’s just something about the 80s, boxy aesthetic combined with the slightly flared arches that floats our boat. Or should we say land yacht? The E30 was a notable step in the evolution of the marque as well as being hugely popular. It’s a do-it-all car with a lasting impact that still resonates today and this particular high-spec example with the legendary M20 straight-six engine certainly ticks a lot of boxes. The E30 was not a huge departure from its predecessor because BMW at this point knew exactly what they were doing. Styled under the watchful eye of automotive design legend Claus Luthe the car was more of a refinement than a complete redesign but that’s not to say it wasn’t an improvement over the E21 in every way. The suspension was revised to reduce the oversteer inherent with the previous incarnation and the new setup of MacPherson struts and semi-trailing rear arms ensured that the car rode and handled like a dream. Engine choice was expanded too with a larger range of four and six-cylinder motors available as well as new body styles being introduced but BMW never actually planned on making an estate version. That responsibility fell, on a whim, to prototype engineer Max Reisböck. With a growing family he simply needed a car with more space so he grabbed a 323i saloon and set about chopping it to pieces in a mate’s garage, with no concrete plans and completely unsanctioned by BMW. Six months later he presented his creation to his bosses who absolutely loved it, putting it straight into production and remaining faithful to the initial design. This 1989 E30 325i Touring comes equipped with a 2.5-litre, 169bhp, six-cylinder engine which is the pick of the bunch in our humble opinion. It is also fitted with a four-speed automatic gearbox which lends more of a laid back dynamic to the car – it is an estate after all. Described as ‘honest’ it is in need of a little TLC but there don’t appear to be any major issues to contend with here and it comes with a comprehensive history file, a must for BMWs of this era. The car has been stored indoors for over a decade which would go some way in explaining its respectable overall condition. It’s a top-spec model that runs and drives although it hasn’t seen an MOT bay since 2007. Having said that it could potentially be back on the road with just a decent service and a fresh ticket and at six large it’s certainly worth a punt, pending a full inspection of course.

At face value there doesn’t appear to be anything majorly wrong with the car but it has been sitting for a while. As stated in the ad it starts first time and both the engine and transmission operate as they should with no overheating issues – it’s a running and driving E30 that just happens to have been sleeping for the last eleven years. The paint is a little tired and there are a few scuffs and scratches but the car is solid with the seller claiming that the only areas in need of attention are the sunroof panel and the seams on the inside of the tailgate but no real detail is given as to the actual condition of said areas. The leather interior seems to be complete and in decent shape but it is starting to show its age in places with a cracked dash and sagging headlining being highlighted as problem areas.

A professional detail would see to most issues with the bodywork but a full service is essential. And we’re not just talking about fresh fluids and filters here – this car would need a thorough going over, from the fuel system to the suspension bushes and we can see from the photos that the tyres are shot. Time is a harsh mistress and lack of use can potentially cause all sorts of problems, from brittle fuel lines to deteriorated brake fluid and whilst the car may run and drive, for how long is another matter entirely. Our advice would be to get the trusty old fine-tooth comb out and replace any parts that have suffered, along with carrying out a comprehensive service. Once faith in the mechanicals has been restored the interior and bodywork could then be looked at.

Problem areas include the wheel arches, sills and jacking points as well as the battery tray. Panels are readily available should any sections need to be replaced but that shouldn’t stop you from giving the car a thorough going over. We already know there is an issue with the sunroof but how bad is it really? Check how far the rot has spread as nobody wants to replace a roof skin.

The M20 needs a new timing belt every 60,000 miles so check the history for evidence. At 120,000 miles this particular car should have had one recently but if not then it’s imminent. Six-cylinder heads can overheat and warp so check for the usual signs of coolant making its way into the oil. Poorly adjusted valves can also cause damage to the rocker arms if neglected and a compression test is always a good idea. Running gear is generally pretty solid on the E30 but it’s pertinent to replace the ATF fluid if there is no evidence of a previous flush and thoroughly inspect for any leaks where the transfer case meets the gearbox while you’re at it. Check the diff for any unwanted noise or clunking – replacements are easy to come by but limited slip units are expensive.

Noises from the rear can indicate worn subframe bushes which will screw with how the car handles. Replacing them can be a pig so it might be worth upgrading everything to polyurethane items to increase lifespan and tighten everything up at the same time. Front strut mounts can rot so inspect them thoroughly. The car comes with an extensive history folder it would seem, with a fully stamped service book to boot so have a good look through and check for any major work as well as for confirmation of regular oil changes. To reiterate make sure there is evidence of that all important timing belt replacement. The V5C is missing but a new one can easily be obtained from the DVLA for £25. A full restoration could be on the cards but we would want to get behind the wheel as quickly as possible. It’s far from a basket case and with a little time and effort you could be daily driving this 80s icon, not to mention fitting right in at car shows. There are no huge jobs to tackle requiring a lift and a garage full of expensive gear so with a few basic tools and the willingness to get involved a lot of the work is very much do-able for the amateur mechanic and the sense of pride and achievement you’ll feel when you finally get that all important MOT certificate will be incredibly fulfilling. Spend some money on a full detail and paint correction too and you’ll have a seriously tasty E30 Touring on your hands. 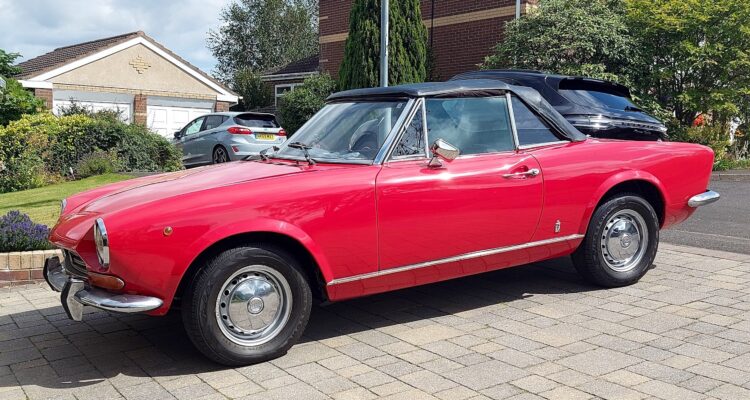 How about a project that, rather than a rebuild, just needs some finishing off? That's all that this beautiful Fiat 124 Spider needs.