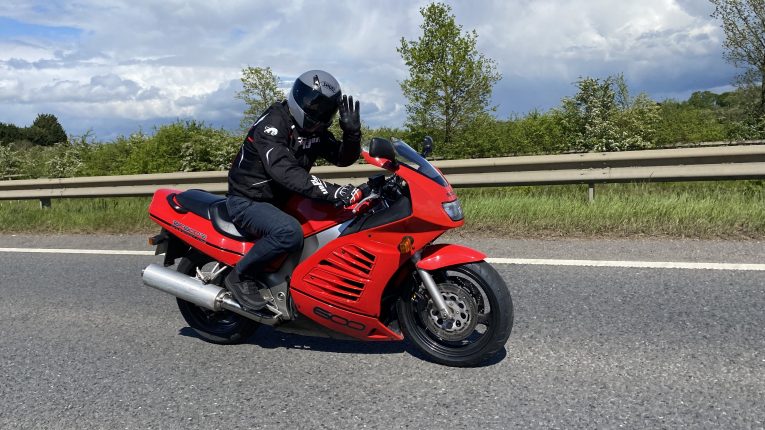 Finally, with all the tinkering finished, the polishing complete and the MoT booked, it was time for the first ride of the recommissioned RF600R and to say I was excited is as large an understatement as saying it’s a bit weird that Ryan Reynolds is buying Wrexham football club. The night before the test was booked, I gave the bike a good once over. The brakes got a final bleed and check; the oil level was checked, as was the coolant and I did a final spanner-check all round that everything was tight. I made sure all the lights and the horn worked and stuck a couple of gallons of fuel in the tank – I didn’t fill it in case that first ride revealed problems that would entail removing the tank again… Finally, I fired it up to make sure it was running OK. It was, though being on old-school carbs, the air was thick with unburned hydrocarbons so I knocked it off fairly sharpish. The morning of the test dawned grey and wet – not inspiring for the first ride of a newly-rebuilt bike on brand-new, hadn’t-turned-a-mile tyres and with a throttle action that might be Ryan-Reynolds smooth or Deadpool aggressive. Still, needs must and while the rain actually held off, I fired her up, snicked first gear and headed off, with one finger tentatively poised over the clutch lever like a mid-1980’s eastern European two-stroke.

As it transpired, I needn’t have worried. The throttle action was smooth and progressive and there appeared to be no hesitation from the engine as I gradually worked my way up the rev range. Running through the mile-and-a-half of 30mph limit of my village, I got the front brakes to start to bite though the rear needed a little more persuasion to get with the program.

Taking to some faster and more flowing roads on the way to the test station, with tyre-fitter (and subsequent MoT tester) Sean from Double O motorcycles in Bedford words ringing in my ears; “Go easy on those tyres for the first 100 miles”, I duly went easy on them to begin with. I rolled into the workshop and he took the bike from me, the usual MoT viewing nerves kicking in. He went through the basics; put the details in to his tablet, checked the lights and horn, then jacked it up and started checking for play in the suspension and wheels. So far, so good. The he noticed a drip of fluid on the bottom of the front brake-caliper banjo bolts and traced it further up to the replacement double-banjo bolt I’d fitted to the master cylinder when I replaced the brake lines. This, as it transpired, was weeping from the union despite me having tightened it according to the torque figure in the manual. As a result, Sean was obliged to issue a fail on the bike, which caused my heart to sink. However, bike MoTs allow a small amount of work to be carried out and once the offending banjo was nipped-up, it no longer leaked and Sean carried on with the MoT procedure.

On the brake rollers it was absolutely fine and thankfully, there is no emissions measurement on bikes, so the rich mixture was irrelevant.

He then told me that following the fail, he was able to issue a pass, since the brake union was no longer leaking and the rest of the bike appeared to be in good shape. I was delighted and I think he was too…

It had rained while he was doing the test so again, I rolled the five miles home very conservatively (with a small ‘c’) and bumped in to a mate who hadn’t ever seen the RF before and we started having a chat about it. It was then I spotted the self-tapper buried in the tread of the rear tyre – the brand-new, now covered nine miles rear tyre – with just its head showing. I was absolutely livid and got to the stage where I was making up swear words. The tyre seemed to still have air in it – the screw seemed to have sealed it so I could have picked it up anywhere on the way home. I rolled the bike back in to the workshop and decided against a temporary repair myself and to whip the wheel off and take it back to Sean for a proper repair.

I wasn’t planning on using the bike for a few days so I left it with him and was happy to get a voicemail telling me to come and collect the wheel and tyres – he’s fixed it. Straight back on the bike and then, wait for a decent afternoon to go for a longer ride to see what it was like. I didn’t have to wait long – a week or so later, I found myself with a couple of hours free one afternoon and it seemed like the perfect time to go for a little ride. It was mid-week, so the roads were busy but not too bad and I decided to stay reasonably close to home for the first proper ride, just in case.

Warming it all up slowly, it wasn’t long before the rev counter needle started to creep up – a check over the bike after the very first ride revealed nothing lose and nothing leaking, so I was beginning to build some confidence. The engine was stunningly smooth and linear and while it isn’t the most powerful or gutsy engine I’d ever ridden – it’s creditable 100bhp appears at 11,500rpm and its peak torque of less than 50lb·ft comes in just 2000rpm lower – the way it just shooms through the rev range is delightful. Thankfully, the clutch and gearbox are smooth and direct and easy to use, as the engine note and the way it works encourage you to use the gears. It has midrange – it’s just a lot more fun to run through the gears, like many inline-four motors. That’s just the way they are…

That first ride was enough to start bedding the brakes in and they gave more and more bite and stopping power as the ride went on. They felt like they would be able to over-power the still relatively-new front tyre – there’s no ABS on the RF so a tender right fore- and second finger were the order of the day but once it’s all settled in, it feels like you can really haul the anchors out. The chassis felt really nice; alive and responsive but not too nervous or choppy. It’s all 25 year-old technology after all with little in the way of adjustment; the front and rear spring preload can be altered but that’s it so whatever the damping is doing, that’s what you have to play with. But again, it’s no MotoGP bike and the handling, like the engine, is willing, able and enjoyable and means you don’t need to be a pint-sized race-winner to appreciate it. You do need to know a good osteopath though… my back and hips aren’t going to like this… Overall, I’m delighted with how this bike has turned out. Admittedly it had been well looked-after in its past; it had just stood, unused, for the last few years but a sympathetic recommissioning programme has brought it back to something approaching its former glory. It certainly rides like it and the smile on my face after that first ride is testament to the fact that you don’t need titanium this, carbon fibre that and six-axis lean-sensitive traction control and a connected TFT dashboard to have some fun. Four pistons with a carburettor each, a steel frame and two decent tyres wrapped in quirky late 20th century styling is all you need to put a smile on your face.

I’ve really enjoyed working on it and I now find myself scouring the ads for the next project. This time, it’s going to be a complete about-face, as I look something that will allow me to go and get muddy.