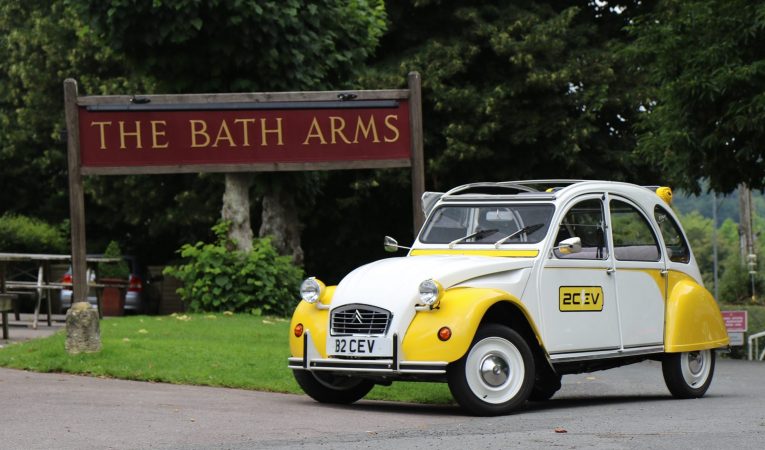 Forget politics or religion. If you really want to start an argument among petrolheads, try bringing up the subject of EV-converted classics. Just watch the nostrils flare and the jaws begin to clench as the conversation turns to 670hp Tesla swaps and half-tonne battery packs and what the notion of losing ‘soul’ via electric means. But this isn’t that sort of electric conversion. With a modest 26hp – almost identical to the standard 602cc air-cooled flat twin – and barely any more weight gain than you’d get from a boot full of baguettes, the 2cEv is designed to capture the spirit of the original Tin Snail.

Electric gubbins aside, that’s exactly what this is, although The 2CV Shop that carries out the conversion can supply virtually everything you need to build a whole new car. The cost of the conversion starts at £16,400, with turnkey cars from £29,000. That’s a lot of money for a Citroën 2CV, with original examples starting at well under £10,000, so it begs the question: why?

The 2CV Shop’s founder Darren Arthur is upfront about this car being a niche proposition. He’s no EV evangelist, either. His daily driver may be a Tesla Model 3, but his fleet also includes a Citroën H-Van with a 4.6-litre Rover V8 and a Honda Beat kei car with its screaming 8,500rpm redline. “It’s not for everybody. But we think this electric conversion will bring more people into classic cars,” he comments. “Most of our customers don’t go that far – they’re going down to the pub or the local classic car meet. And it takes what was already a very simple, reliable car and pushes that concept even further.”

Another aspect is futureproofing, he points out. Many of the surviving 2CVs are 1980s examples that don’t currently qualify as historic vehicles. As such, they already fall foul of the congestion charge and other low emissions schemes, and there’s no guarantee that these won’t be extended to older historic vehicles at some point too.

The 2CV Shop was involved with the development of the conversion kit, which comes from Citroën specialist Méhari Club Cassis, based near Marseille. “I drove the prototype several times during the development, and the big thing for me was to ensure it retained the character of the original,” notes Darren. It’s also worth noting that the conversion is fully reversible with no cutting or welding to the shell if you go for the standard battery position. Alternatively, The 2CV Shop can lower the boot floor to give you more luggage space with the battery in place, but this too is reversible.

A TALE OF TWO 2CVs

To find out if the 2cEv lives up to its promise, we’re about to take it out for a spin on the lanes around The 2CV Shop’s Wiltshire HQ. But first we jump into a standard car for comparison.

You’ve probably heard the story before: the 2CV was conceived as transport for rural France, at a time when many people were coming from a horse and cart. It had to be simple, and it was. The clutch is progressive and easy to operate, the unassisted steering is weighty but reasonably precise, and the horizontally-opposed twin provides leisurely progress. The 2CV chatters along with a noise rather like a sewing machine – an honest, utilitarian soundtrack to suit an honest utilitarian car, but not one that really dominates the driving experience. Instead, the 2CV’s most eccentric feature is its hockey stick gear lever, which you slide and twist to operate. It’s a constant reminder that you’re driving something a little bit different.

After 10 minutes puttering around the lanes, we swap over to the 2cEv. It’s identical inside, barring a fuel gauge that’s been subtly reworked to show how much charge remains in the 10 kWh lithium ion battery. That’s a tiny battery by mainstream standards – barely a quarter of the size of a modern electric city car’s – but it only has 630kg to haul around. Even so, the 65-mile range is aimed more at local use than long-distance touring.

The electric motor is bolted to the standard gearbox and clutch. You can still use both if you really want to, but Darren’s advice is to start off in fourth and leave it there. That’s precisely what I try to do, although it proves deceptively difficult to override the instinct to dip the clutch as you come to rest. Squeeze the accelerator and the 2cEv pulls away quite smartly. You do notice the extra torque, but the electric motor has been set up to give a progressive power delivery, so it feels more like a slightly stronger IC engine than a typical EV. It pulls harder than the petrol engine until about 45mph, where the performance starts to taper off. Top speed is around 65mph, while the petrol car is closer to 70mph. Overall, though, there’s very little in it.

You do lose the thrum of the air-cooled flat twin, but you also start to realise how much of the original noise comes from other areas, such as the gearbox. That, of course, remains unchanged. Throw in some additional noise from the motor, and the end result is a lot closer to the original than you might expect. It’s a far cry from the rather sterile environment of a modern production EV, and all the better for it.

The other 2CV trademarks are here in abundance too. There’s the same roly poly handling, with quite alarming amounts of initial body roll, but allow it time to settle and the chassis feels stable and composed. With only 30kg of extra weight – split roughly equally between the two ends of the car – you simply don’t notice any difference in the handling. The same goes for the brakes, which are mechanically unchanged – the motor does apply a little regenerative braking when you take your foot off the accelerator, but it’s only comparable to the engine braking in a petrol car.

Even with the extra torque, the 2cEv is by no means a fast car. But the chunky steering offers plenty of feel, and the compact dimensions mean it’s great fun to punt around the lanes. With the roof rolled back and the sun starting to break through the clouds, the little Citroën feels like it’s in its element. Had it started off with a bellowing V12 or a big burbling V8, I’m sure things would be different, but most of the time I simply don’t notice the lack of the combustion engine here. What I do miss is the gearchange. Sure enough, there’s little to be gained from changing gear unless you’re on a really steep hill, and it proves almost impossible to match the shaft speeds, so each shift is greeted by the sound of gnashing teeth. Best to leave it to its own devices.

We get back from our jaunt having used about a quarter of the available battery capacity. Recharging the 2cEv is simply a matter of plugging a cable into the port where the petrol filler cap would normally be and connecting it to a standard 3-pin socket. A full charge is said to take about 3.5 hours. The 2CV Shop also provides a Type 2 adaptor for those who want to go further afield and use public charging stations, although it doesn’t charge any quicker. This back-to-basics approach seems quite in-keeping with the original ethos of the 2CV. They were never designed to go especially far or especially quickly, and the smiles on the faces of the people you drive past are every bit as broad as they would be with an IC-engined example.

Ultimately, perhaps the biggest compliment that you can pay this car is that you soon forget that it’s electric. To some, the idea of spending this much money on a car that feels much the same as it did with the IC engine will be nonsensical. For others, the ease of use, the reliability and the zero emissions credentials of the electric drivetrain will be significant incentives to take the plunge. Where you stand on that debate is up to you, but those who do want to go down the electric route can do so in the knowledge that the baby Citroën’s appeal remains intact.