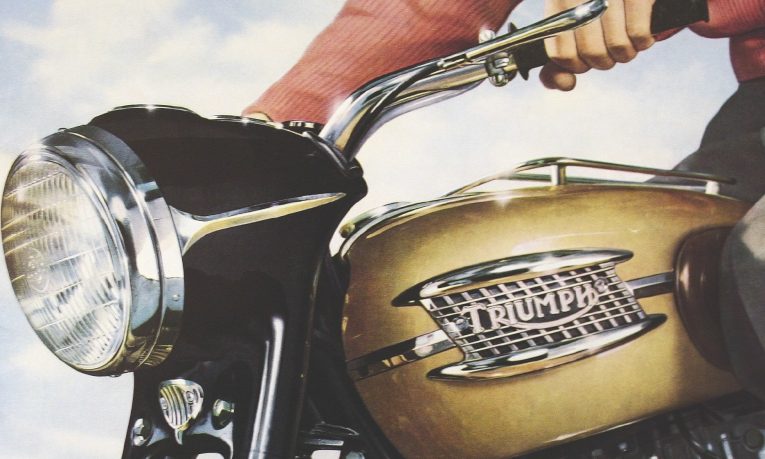 Having recently acquired a 2006 Triumph Speed Triple 1050 to add to the ever-growing Car & Classic fleet – and instantly falling in love with it – we thought we would take a look at the history of one of the most well-respected and enduring motorcycle manufacturers in the world. Triumph is an institution in the world of two wheels. A popular and acclaimed manufacturer since the turn of the twentieth century, the British firm has consistently been at the forefront of motorcycle production and competition. With such a rich and celebrated history then, there’s a lot to cover, so let’s gear up and tuck in. The birth of the Triumph name can be traced as far back as 1886 when German immigrant Siegfried Bettmann, who was importing bicycles and sewing machines at the time under the banner of the S. Bettmann & Co. Import Export Agency, decided to change the name to The Triumph Cycle Company. It wasn’t until 1888, with a word in the ear and support from fellow German and company partner Moritz Schulte that Bettmann decided to evolve the enterprise into a manufacturing business, now under the name of New Triumph Co. Ltd and with financial backing from Dunlop Tyres. The pair duly set about making bicycles at their new factory in Coventry but moved on to mechanised transport after ten years in business and in 1902 produced the very first Triumph. A far cry from the motorbikes of today the Schulte-designed No.1, as it was aptly named, was essentially a bicycle with a single-cylinder, 2.2bhp Belgian Minerva engine strapped to it. Triumph had entered the chat.

Podium Places and Military Metal – The Growth of a Brand

Triumph continued to produce the No.1 and by 1905 had developed their very own, in-house motorcycle. A new 450cc motor producing 3.5bhp was born and with an annual output of 1000 units by 1907 Triumph were going great guns. During this time Triumph also moved to larger premises to cope with its rather expeditious growth.

At this point Triumph began to see its first taste of motorsport success (something that would become somewhat of a habit) as Jack Marshall wins the single-cylinder race at the second ever Isle of Mann TT. They didn’t do too badly the previous year either, coming second overall. This success was cut short however when Archduke Ferdinand got himself assassinated, and we all know how that ended. War. What is it Good For? Motorcycle Production, apparently. As heinous as it all was the First World War actually provided a boost to Triumph as they supplied more than 30,000 motorbikes to aid the Allied effort, most of which were the 499cc Model H Roadster or ‘Trusty Triumphs’ as they were known and arguably the first modern motorcycle.

Bikes, Cars and Change at the Top – The Post-War Years

Bettmann and Schulte parted company after the war when Schulte wanted to steer Triumph in the direction of automobile manufacture, much to the chagrin of Bettman, but ironically Triumph would later go on to purchase the former Hillman car factory and begin to produce their own cars in 1923 under the Triumph Motor Company banner. The company continued to grow in the ’20s and ’30s with annual production numbers hitting the 30,000 mark and Triumph were now one of the main manufacturers of cars and bikes in the UK.

As the 1930s trundled along, however, cracks were beginning to show at Triumph and financially they weren’t faring too well. They had sold their bicycle arm to Raleigh (who you may have heard of) and then decided to split the car and motorcycle production into two separate businesses in 1936. Motorcycles had always fared better for Triumph and following Bettman’s departure in 1933, rival company Ariel’s owner Jack Sangster acquired the motorcycle business three years later. It was at this point that the lines on Triumph’s charts started to head up and to the right again, aided substantially by its new US export scheme. The company name was again changed to the Triumph Engineering Co Ltd and former Ariel man Edward Turner was appointed chief designer by Sangster. His first job was to oversee the design and production of the new 498cc Speed Twin, released in 1937. Capable of more than 90mph this bike is often lauded as the definitive British motorcycle and its engine would go on to find fame and fortune with triumph for over 40 years. In fact, the Speed Twin name is still alive and well today with the latest model having been released this year.

Phoenix from the Ashes – The Aftermath of Yet Another War

Just when things were going swimmingly for Triumph its factory was destroyed when Coventry was devastatingly bombed during World War Two. Production reconvened two years later, however, at Triumph’s brand new factory not far from the original site in Meriden, in 1942. Again, the British company leant its services to the war effort, this time providing over 50,000 bikes in the fight against the Nazis. Production of civilian model Triumphs resumed in 1946 (although many of the bikes produced for military use were recommissioned for civilian use after the war ended) with the introduction of the Tiger 100 (which won it’s debut Manx Grand Prix with Ernie Lyons in the saddle) and 3T, alongside the new Speed Twin model. The late ’40s saw other popular models come to fruition with the release of the 500cc TR5 Trophy and 650cc Thunderbird 6T, one of which, a 1950 model, was ridden by Marlon Brando in the 1953 classic movie The Wild One – the story of an outlaw motorcycle gang and its main protagonist Johnny Strabler, played by Brando, who would become a cultural icon of the 1950s. The Brando effect caused a huge spike in interest in the British Firm and its bikes and America was now a huge market for Triumph. Triumph didn’t just produce ‘cool’ bikes though. Oh no. They could make them go fast too. Very fast. In 1955 Johnny Allen piloted a third party-built streamliner fitted with a tuned 650 Thunderbird motor to a record breaking 193mph on the Bonneville Salt Flats in Utah. Triumph would continue to hold world motorcycle land speed records for the next 15 years.

Mr McQueen and Further Racing Success – The ’60s and Beyond Earlier Triumph models had already proven popular in the States and Brando’s Thunderbird was a huge hit but it wasn’t until the 1960s that people really started to take notice of the British firm. The T120 Bonneville (named after those famous Salt Flats) was unveiled in 1959 and would go on to become the best-selling British twin-cylinder motorcycle of all time but it was a certain charismatic movie star and his 1962 TR6 650 that really stole the show. People couldn’t get enough after seeing Steve McQueen riding said bike in The Great Escape and along with that cool image Triumph had now cultivated, its motorcycles were also embraced by the customisation crowd thanks to their performance characteristics and they pretty much dominated the market in the 1960s. Triumph also garnered a host of new silverware for the company trophy cabinet towards the end of the decade with wins in both the Daytona 200 and Isle of Man Production TT. This racing success was bolstered in 1967 when famous motorcycle stunt rider Evel Knievel attempted to jump 141 feet over the fountain at Caesars Palace casino in Las Vegas on a Bonneville. Unfortunately for Knievel he came up a tad short, breaking more bones than we’ve had hot dinners in the process. Ouch. While the daredevil rider may have been stretchered away in an ambulance it was still great publicity for Triumph.

Things would take a turn in the ’70s, however, stemming from the influx of Japanese motorbikes from the likes of Honda and Kawasaki. These bikes were technologically advanced as well as cheaper than the equivalent British output at the time and Triumph, with their outdated and inefficient tooling simply couldn’t compete. As the public turned to these more modern motorbikes Triumph ran into financial trouble, culminating in bankruptcy, and the Meriden factory closed its doors in 1983. The future of the company was hanging in the balance.

A Second Bite at the Cherry – Modern Day Triumph

In steps John Bloor. Not only is he the great redeemer, sent by the motorcycle gods, he’s also a plasterer by trade who had amassed substantial wealth as a property magnate. Bloor bought the remnants of the Triumph brand that same year and after initially sub-licensing production of limited numbers of Bonnevilles he proceeded to pump a large amount of cash into the company. Having adopted Japanese manufacturing methods and built a brand new factory in Hinckley, Triumph were back in business by the early ’90s. With a host of new models, including the Trident 750cc and 900cc triples, the Trophy 900cc triple and 1200cc four-cylinder, and the Daytona 750cc triple and 1000cc four, Triumph were now producing motorcycles that could successfully compete with the Japanese and Triumph Motorcycles America is formed across the Atlantic. Even a devastating factory fire in 2002 couldn’t stop the British firm’s triumphant return to the top and the brand continued to grow throughout the 2000s, picking up further TT wins along the way. With the release of a whole new family of modern classic Bonnevilles in 2015, Triumph have remained true to their heritage and what made them such a popular brand ,whilst also looking to the future and continuing to produce technologically advanced and dynamic modern motorcycles. It’s been somewhat of a bumpy ride for Triumph but thankfully they cleared the barbed wire and they stuck their landing. They have endured, remaining at the cutting edge of motorcycle design and production. There’s just something about owning and riding a Triumph that feels truly special. Not only are you enveloped by that rich heritage, like a well-fitting set of leathers, but there’s also the feeling that you’re just a few bike lengths behind the likes of Brando and McQueen as they speed off into the sunrise.