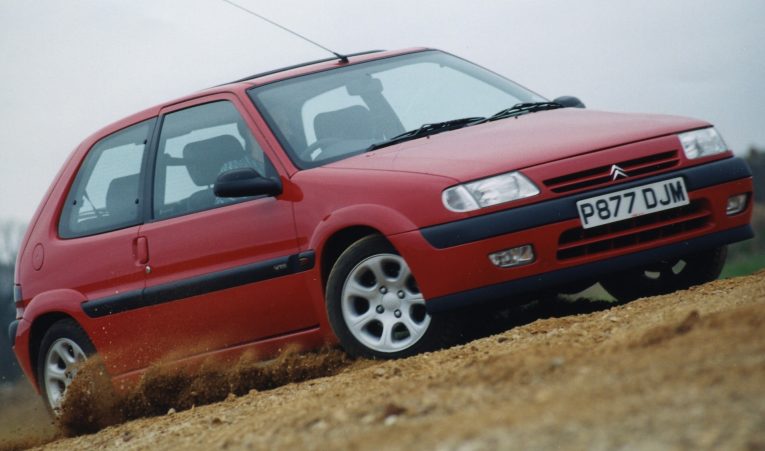 There are some cars that seem predestined to go a certain way. Cars like the Citroën Saxo, for example. When it hit the dealerships in the late ‘90s, it was a hit from the off. In ‘normal’ trim, it wasn’t a particularly revolutionary car. However, Citroën were masters of marketing, and amped up the buzz by offering all manner of special editions with brightly coloured seat belts and amusing names like West Coast, Furio… Bic. Yes, the pen people. We’re not making this up.

Citroën also went one step further by offering free insurance for anyone aged eighteen or older. The dealerships were soon awash with spotty teens waxing their debit cards in the air, frantically. And that wasn’t all. Citroën included the VTR and 16-valve VTS models in this. The utter, utter loons. With 100 and 120bhp respectively, these hot hatch tearaways became the definitive machine of a generation. The insurance man wasn’t standing in the way until Citroën realised it was a terrible idea and thus stopped giving away insurance. This was a time when the Max Power generation was in full, big-wheeled and body-kitted swing. The aftermarket erupted with wheel, suspension exhaust, body, interior and stereo options for the VTR and VTS. The magazines were awash with them, too. They were splashed on the covers of many, with chrome wheels, Lamborghini-style doors and – we’re not making this up – even a vinyl snakeskin wrap. If you know, you know.

Of course, while this popularity was great for Citroën and the modified aftermarket, it wasn’t good for onlookers. Like the Vauxhall Nova, the Saxo had become a stereotype. It was a cliche of a car, the boy racer’s chariot of choice. It was associated with poor driving and loud exhausts, with cruise culture and with thumping stereos. And it held onto this, because the Saxo’s follow-up, the C2, simply didn’t have the same magic. It took years for the Saxo to shake this image. In fact, many would argue it still has it. But don’t judge it on its past. The Saxo, in particular, the VTR and VTS models are brilliant little cars. And one that is fast appreciating in value. The time to buy one is most definitely now. An Introduction to the Citroën Saxo

The Citroën Saxo took over from the Citroën AX, which was another belting little car. Small, basic, frugal, practical, the Saxo was the perfect little car in many respects. It wasn’t a particularly powerful thing in most cases. The 954cc engine was glacial, though the 1,124cc was a bit better. There was also a 1,360cc unit that had 75bhp. The best engines, however, were those reserved for the VTR and the VTS. Unlike the AX before it, the Saxo wasn’t its own car. By which, we mean the design was shared. It was based upon the 106 from Peugeot, which in turn was loosely based on the AX. The 106 platform sharing was a good thing though, as this opened up performance options. There was, let us not forget, the 106GTi.

The VTR and VTS were powered by the same 1,587cc four-cylinder engine. However, in the VTR, that engine had an eight-valve cylinder head, whereas, in the VTS, it had sixteen. In a car that just about tipped the scales at 935kg, this made them a riot. The 100 and 120bhp respectively made them riotous little cars. There was nothing overly dynamic about their chassis, but they were tight and sharp, with snappy steering and decent brakes. They were, quite simply, the perfect hot hatch.

What Should You Look For?

The one big thing you need to be wary of is evidence of past modification. The Max Power generation lived in the moment, man. As such, when they fitted sick Lexus lights and phat alloys wheels, they threw the OE stuff in the bin. As such, it is surprisingly hard to find good interiors, panels and wheels.

Even if the car is presented as standard, you still need to look for the lasting damage of modification. The parcel shelf, the engine bay, the wiring (because of stereo upgrades), all of this could have been messed with in the past.

Check the driveline. Has it been abused? Look for engine smoke, look for leaks and check the condition of the clutch. What about the suspension? It should be free from any knocks or bangs. Replacement stuff is easy to get hold of, thankfully. But it’s good to know going in. Of course, you only need to look for the above if you’re looking for a cheaper example. If you’re happy to spend a bit more, you can get a standard one. Though be warned, prices are on the rise. What was a £500 car ten years ago is now a £3,000 car. The cars that have survived the Ripspeed isle are getting hard to find, too.

Other issues to be aware of? You need to look for any evidence of crash damage (check the chassis rails/inner wings) and also any damage from attempted theft, as it was and still is easy to just pull and bend the top of the doors out to gain access. Check for rust, as it can be an issue for early models in particular. Floors, sills and arches are all prone to rot.

The easier examples of the VTR and VTS to pick up are the facelift models built from 1999 onward. You can get a running, driving, road-legal example for as little as £1,500. Maybe even less, but you are at the rocky end of the quality pool, here. Spend a bit more, £2,500 for example, and you’ll get a clean, tidy, un-messed with example. This is all for a VTR. Add another £500 to £1,000 for a VTS. For us, it would have to be the original version. It just looked a bit better to us, the lights a better size, and of course, the Mk1 had the best alloys. The only problem is that early cars are getting hard to find, and as such, you need to anticipate paying more than you would for a newer model. The smart money is sniffing around the Mk1 already, and so you can expect to drop £2,500 for a semi-decent VTR, twice that for a minter, if not more. The VTS will be a grand more, but again, this all depends on whether or not you can find one.

Why Should I Buy One?

The hot versions of the Saxo have moved on, they have transcended beyond their past boy racer image and are now being seen as proper little modern classics. If you’re still not sold on the idea, may we run the notion of the Peugeot 106GTi by you? It’s pretty much the same car, and yet it is enjoying five-figure prices at the moment, and they’re not getting any cheaper. The Saxo VTR and VTS, in unmodified, original condition will follow suit. The prices are already rising. But taking investment out of it for a second, you should buy one because they are quite simply brilliant. Proper, honest pocket rockets that will put a smile on your face every time you go for a drive. They are fun, happy, giddy little cars that are closer to a go-kart than a car. Make sure it’s wearing decent rubber and fitted with good brakes and you will be laughing. Literally. That’s what this car does to you.