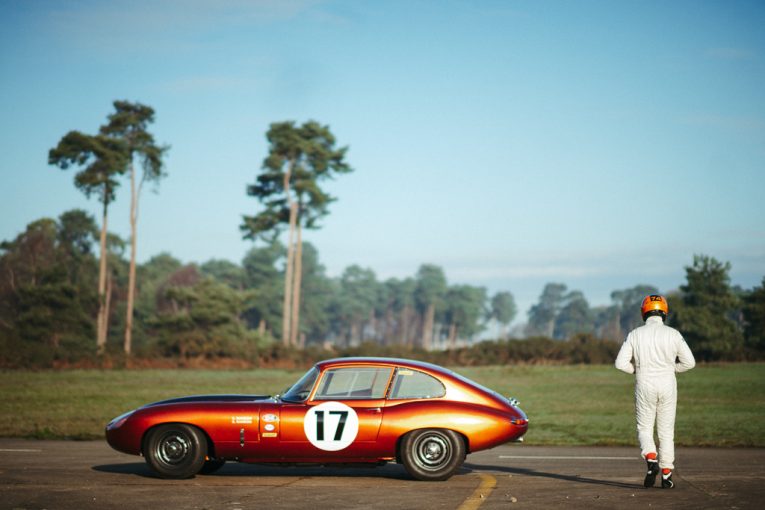 There are some cars that we just accept as being perfect. The Ferrari F40 doesn’t need to be changed in any way. The original 1959 Mini is a perfect triumph of packaging, engineering and subtle style. And then there is the Jaguar E Type, a car described by Enzo Ferrari as being “the most beautiful car in the world.” That right there is high praise. And as such, the E Type is not a car that needs to be changed, right? Well, here’s the thing, just because something is wonderful to begin with, it doesn’t mean it’s reached its full potential. That’s the realisation the team at Bridge Classic Cars had when they were presented with the opportunity to buy a tired, dismantled and somewhat forgotten 1967 Series 1 E Type 2+2. They could have gone down the tried and tested route of restoring it to original specification. But what, they pondered, if they opted for the path less travelled. What if they used this opportunity to build a reimagined E Type? A machine with the familiar, beautiful lines, but with a whole host of other design touches, too? It was a brave path to take, but fortune favours the brave, right?

The E Type, while forgotten and in bits, was solid at its core and as such, would lend itself well to being the foundation of a bespoke build. The plan was to build on the car’s rich motorsport heritage and driver appeal. Rather than wood and wicker, this would be stripped and shouty. From the off, any notion of subtlety or the traditional gentile classic cars shows was thrown out of the window. This E Type was to be a screamer, a statement car, one for the driver. The build, which was complete this year, took over three years in total. This is down to the fastidious nature of the team at Bridge, and also the desire for this car to be perfect, not rushed. There was no deadline or pressure, instead this was a car built for the love of it. And those builds are often the best.

The shell was stripped down to bare metal and reworked. The bumpers and mountings were removed, as were all the external seams. Furthermore, the rear hatch was welded in and as such, fused into the lines of the car. This wasn’t going to be a grocery-getter, so a rear hatch wasn’t important. Similar treatment was afforded to the front end. All the seams and bumper mountings were shaved and smoothed and the front indicator housings were deleted (the indicators are now part of the headlight). And while all these changes may make the purist wince, we would encourage them to look again. This car isn’t all about what’s been taken away, it’s also about what has been left and what has been added as a result.

The bonnet vents and securing straps on the sides, the door handles, the wipers and the fuel filler cap. Little bits of the original car remain. The body, now smoother than laminated silk, stands out now. The shape has more purpose, more impact. The core design of the car can shout and can breathe. It’s not being weighed down by visual distractions like bumper and seams. Plus, the incredible three-stage candy ‘Volcano Orange’ paint serves to hold the eye even longer. This car is not one for the shy and retiring types. Then there’s the rest of the design touches. The deliciously period Dunlop alloy wheels, the Perspex windows, the stripped (and equally orange) interior, the race dash, the harnesses, the race seats, the orange trimmed door cards and matching (removable for track days) mats… nothing has been missed in the pursuit of E Type-shaped perfection. It is magnificent. Of course, you can’t make an E Type look this good without giving it the requisite bark and bite. Happily, Bridge Classic Cars hasn’t scrimped on the oily bits. Not that you can call them oily – they’re immaculate. The familiar straight-six Jaguar engine is still present, but it’s far from standard. Fully rebuilt, it now houses fast road camshafts, Mahle pistons, it’s been fully balanced, the cylinder head has been reworked and tuned for better flow and the whole lot is fed by a gaggle of Weber twin carbs. The exhaust, too, is all new and crafted from stainless steel. The whole lot, when put on an engine dyno, pulled well over 250bhp. It is… ample, shall we say. Add the rebuilt five-speed manual transmission into the mix and you’re left with a car that is truly for the driver. Of course, power is nothing without control, which is why the stripped, cleaned and powder coated chassis of this E Type plays host to GAZ adjustable shocks and springs and uprated bushes. The differential has been rebuilt, the rear brakes too, which are now from a Series 3. The front brakes are all aluminium four-pot calipers with grooved and drilled discs, braided lines throughout and race fluid. It is a car that, while utterly captivating, has been built to be driven hard and with little sympathy. It’s a machine that needs to be worked and worked hard. It’s still a road car as well, but it’s a spirited, soulful, event of a car. This car is an assault on all of the senses. It’s become more than just an E Type. It’s something more. Something exciting, something unique and something so loaded with personality and character it makes other E Types look… muted? Is it for everyone? Of course not, it’s bright orange and only has two bits of carpet. But if you want a car that breaks from the norm, if you want something like no other, and if you’re happy to be responsible for a whole host of sore necks every time you take it down the high street, this is most definitely the car for you. It is proof that vision and passion are worth pressing into fruition. This car could have been nothing more than an idea, but thanks to Bridge Classic Cars, it’s gone much further than that.