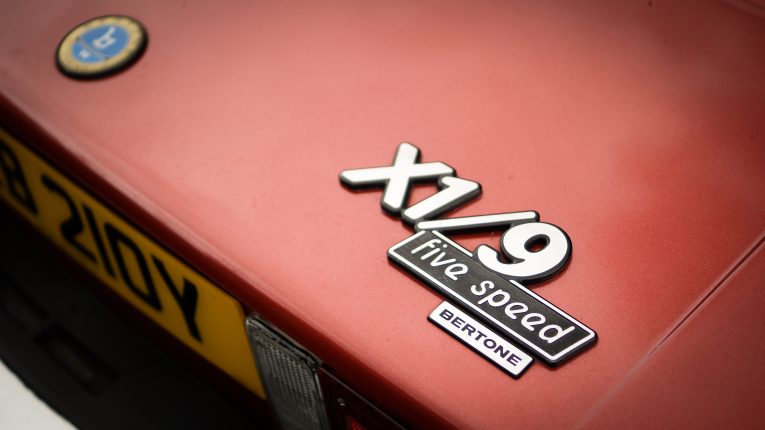 Fiat would like you to know that it is, and always has been more than just the 500. Yet when you say classic Fiat, the cute little 500 is what the mind’s eye conjures. But Fiat made far more cars than just the 500. There was the Strada, the 131 and many more. And of course, there was the car we’re looking at here, the small but very mighty Fiat X1/9. A mid-engined, two-seater sports car that offered specification and driver appeal like nothing else in its class. It still feels sharp and alive today. Back in the 1970s, it must have been like driving something from outer space!

Of course, like all ‘hot’ Fiats, the X1/9 wasn’t a Fiat only project. Much like the 500 and the 131 were tickled by the Abarth, the X1/9 was also the work of a third-party, namely Bertone. The Italian styling house came up with the design, which was based loosely around the oily bits of the highly successful Fiat 128 saloon. The big differences being much less bodywork, and a change of address for the engine, which now had a midship post code rather than one from the 128’s nose. By putting the humble 73bhp engine in the middle, Bertone gave a new lease of life to the chassis. It featured disc brakes at each corner, MacPhearson strut suspension all round, too. Plus direct, communicative rack-and-pinion steering. There are sports cars in 2019 that can’t match that spec. Yes, the X1/9 was something very special indeed. The X1/9 was an outstanding success for both Fiat and Bertone. It enjoyed a production with Fiat from ‘72 through to ‘82, then with Bertone itself from ‘82 to ‘89. As the years have rolled on by, we have been keen to welcome the X1/9 into halls of classic status, but only if we can find them. Sadly, being a Fiat of the ‘70s, most of them have dissolved into little more than a puddle of rust and oil. In fact, it’s rot that has been the biggest killer of these wonderful little cars. But, don’t think you just need to look for rust. Here are five things you need to look for, including rotten tin, if you’re in the market for an X1/9:

It’s a bit of a given to say rust is going to be an issue on an old car, but you have to remember that the X1/9 isn’t just an old car. It’s an old Italian car, and they like to rust. There isn’t a panel on an X1/9 that is able to avoid the dreaded tin worm, so even if it ends up with a seller huffing and puffing at you, check everything and check it twice. Door bottoms, the floors, the boot floors front and back. The inner sills can and will dissolve, the windscreen surround, the arches, the bonnet, the boot, the roof edges the… you get the idea. Oh, and as an added bonus, the bulkhead is triple-skinned, so if that’s rotten you’re in big, potentially car-killing trouble. It’s an engine out job to repair rust here.

The main issue, other than the metal being past tense, is that replacement panels are harder to find than the back-end deposits of a rocking horse. If an X1/9 is rotten, it’s going to mean searching high and low for panels. Failing that, it’s going to mean custom fabrication or repairs to what you already have. This is a costly exercise.

And of course, you have to look for cheap, half-arsed bodges. You’re probably not going to find an X1/9 that has never seen the touch of a welder. As such, it is your responsibility to make sure any previous repairs have been done to a satisfactory standard. The fuel system on the X1/9’s 1300 and 1500 engines is a relatively simple carb affair. Sadly though, these carbs get tired over time and the auto choke systems can fail, so a rebuilt will be on the cards. Then there’s the X1/9’s favourite party trick of not starting in hot conditions. This is because it gets so hot in the engine bay that the fuel simply evaporates. Interestingly, the carbs have electric fans built into them to help prevent this – nice bit of forward thinking from Fiat, there – but they almost always give up. You can try and repair the fans, or you can just stick an electric fuel pump on. This is the most common solution, and the easiest and least damaging to your bank balance.

Now for the cooling system. On paper, it’s a pretty good and robust setup. The radiator is actually at the front of the car, meaning it can access all the cold air it wants. Of course, it’ll struggle if the the front grilles get blocked up, or if the radiator itself gets a thick layer of mud and leaves on it. This can and will lead to overheating, and when an X1/9 overheats, it takes the cylinder head with almost every time. As such, check the radiator, and make sure the cooling system has the correct coolant in it.

While the rev-happy little engines are a huge part of the X1/9’s charm, almost every owner will tell you that it’s the way it handles that makes them smile. Trick suspension, fantastic weight distribution, capable brakes, the X1/9 is a riot to drive. But only if it’s in fine fettle.

Despite being a featherweight car, suspension bushes and ball joints like to fail, and when they do, the handling is thrown completely out of whack. Happily, replacement parts are readily available for the front end at least, and changing them is a job you can do at home. For rear end parts, especially shocks and ball joints, you may need the help of a specialist.

As for the steering, the factory rack-and-pinion setup is simply superb, but over time can become worn and tired. There shouldn’t be any play at all in an X1/9’s steering. If there is, you’ll need to replace the rack, and if you’re going to do that, you may as well fit a quick-rack from somewhere like Eurosport. It will not only restore the steering, it will sharpen it to near race car specification. Perfect! The engines fitted to the X1/9 are pleasingly robust and love to rev. Of course, you need to apply some general car knowledge by listening out for knocks and bangs, checking for signs of oil leaks and overheating. If you spot any faults, you’re almost certainly going to have to take the engine out, which has to come out underneath the car in most cases. There just isn’t enough room to work on the engine in situ.

The same engine out rules go for routine maintenance, such as changing the cambelt. You’re not going to do it with the engine in situ, even if you have the hands of a Borrower. It might look possible, but honestly, save the skin on your knuckles and drop the engine. It’ll give you a chance to check on that triple-skinned bulkhead.

Transmissions are fairly tough, though linkage bushings can wear and ruin the gear changes. As with any old transmission, the synchros can go, especially on second and third gear. If this happens, you’re going to be looking at either a reconditioned ‘box or, depending on how much you love the car, a full rebuild. Of course there is the potential for electrical calamity, this is an Italian car! The motors in the pop-up headlights can fail, leaving you blind at night. The interior electric can become highly recalcitrant, evidenced for example by gauges that don’t operate or dash lights that cease to function. Oh, and the horn can fail, which you simply can’t allow on an Italian car!

Going back to rust, if it gets into the doors it can and will take the electric windows with it, either rusting the mechanisms solid, shorting out the wires or, more than likely, both. Happily though, there aren’t a lot of wires in an X1/9, so when something does go wrong, it should be a fairly straightforward fix. And that’s good, because you’ll want to be out on the road!

It’s no secret that there is a lot to lookout for on an X1/9, but trust when we that if you find a good one, it’ll be worth it. Light, agile and rev-happy, the little Fiat X1/9 is an absolute delight to own and drive. Don’t think of it is a Fiat, think of it as a Ferrari for the budget conscious! Find your Fiat X1/9 here.