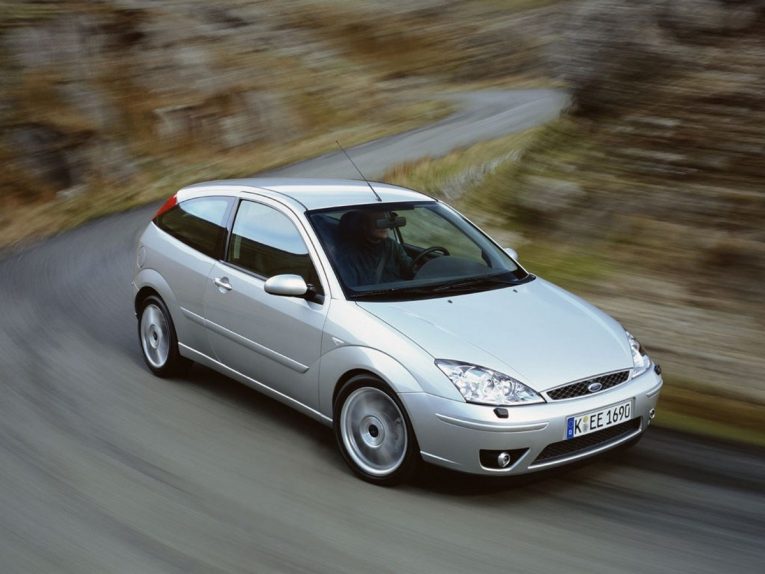 Hot hatches are always and will always be popular. That said, the ongoing popularity of hot hatches as a whole isn’t a linear affair. Some are instant hits, others take a few years to find their feet and with it, find a following. A case in point would be the car we’re looking at here, namely the Ford Focus ST170. Despite the blue oval on the front, and the inclusion of the then (2002) new ST designation, we were slow on the uptake. This was probably down to the fact it was hugely overshadowed by the 212bhp RS model. The thing is though, the Focus RS is now well on its way, with rough cars coming in at £10,000 on the rare occasion they do pop up. Tidy cars are north of £15,000, whereas a mint Mk1 Focus RS will easily swallow £20-25,000 of your hard-earned. They’ve reached a point now where they’re almost too much of a financial risk to drive, and that’s a shame. Happily though, if you can live with a tiny bit less power, you can have an equally exciting Focus for a fraction of the cost. But only if you pounce now, while prices are still favourable.

An introduction to the Focus ST170

The Ford Racing Puma was excellent, but by 2002 it was also dead. Ford killed off the Puma as a whole in 2002, after it had pulled the plug on the admittedly brilliant Racing Puma a year earlier. With the Puma’s demise, Ford was left with a gap to fill, namely that of a small to mid-sized hatchback that had a bit of bite and a bit of bark. It was working on the Focus RS, but that was a halo car akin to the Cosworths of old. Ford needed something to sit below it, something that did that same job as, say, the Escort XR3i back in the day. The Mk1 Focus was still immensely popular, so it made sense to heat it up a bit, but not so long that it would better the RS that was being developed. Enter stage left the Focus ST170, or to use its internal project designation, project Piranha – how cool is that? The idea was to make an ‘everyman’ hot Ford very much in the spirit of the RS and XR cars before it, though this time its rear would be adorned with the new ST moniker. Ford took the normal Zetec engine and allowed Cosworth to breath upon it. The exhaust manifold was swapped out for a stainless item, the aluminium cylinder head was re-flowed, variable valve timing was fitted, and there was a dual-stage intake manifold along with a full stainless exhaust including sports catalytic converter. The resultant power was, as the name sort of gives away, 172bhp.

It wasn’t all engine though. The already brilliant fully independent suspension was lowered and stiffened, bigger (300mm) brakes were fitted, as was a set a 17-inch model-specific alloy wheels. The interior could be specified with full leather Recaro trim, the body was given some sporty touches and the dials were painted blue, because Ford. It was the full package, but it wasn’t an RS, so nobody bought it. Shame.

In a word, low. The Focus ST170 is on the verge of falling into the territory of being bought exclusively by people who know what they are and who want them as a modern classic or toy. However, the negative is that the ST170 is still so cheap that it attracts buyers who just want something they can screw into the ground before going for their next hot hatch purchase. As such, you need to be exceptionally careful, and only buy a car that’s been kept away from the modifications, and one that also has plenty of verifiable history. The £1,000 ST170 is not the ST170 you should be buying. However, double that and you’re quickly in the territory of the better cars, there’s really not a lot in it price wise. Three-door cars with full Recaro trim are the most sought after, and thus the most expensive, but even so, £3000 should get you one of the best. Five door cars are considerably cheaper, as they don’t have the ‘cool’ three-door kudos. You can get a nice, well looked-after five-door for as little as £1,500. The king of them all, however, is the left-field estate version. They are incredibly rare and are almost exclusively now in the hands of enthusiasts. Find one of these and you’ll have to part with a minimum of £4500 for one that’s worth having.

Why should I buy one?

Quite simply, because this is a car you can buy and that you can enjoy. The Mk1 Focus is still praised for its chassis, and that’s the case for a 1.6LX. Get yourself the ST170 with all that power and you’re well on your way to having a lot of fun. Then there’s the big selling point – this is a Ford, and Fords are cheap to run, they’re cheap to insure and they’re cheap to maintain. This is a modern classic that you can use every day without having to make any special considerations, and you’ll be smiling every day, too. The ST170 was a car we missed back in 2002 because we were too damn busy looking at the RS. More fool us though, because the ST170 was there for the taking, and had we done so, we would have loved it. Those who do have one will do nothing but sing their praise – it’s time for you to join them.

How long will it take to see a return?

Fords are always a difficult one to gauge. We used to think the Mk1 Escort was a cheap hack, and then within a decade we’re selling our children to buy one. The Focus ST170 is very much at the bottom of the curve at the moment, which would lead us to believe that it’s going to be a little while, two to five years, before prices truly start to climb. But that’s not really the point with the ST170.

The time to buy an ST170 is indeed now, but not with a view to making profit. No, the time is now in regard to getting yourself a car that has pedigree, that has heritage and has the ability to transform the most boring errand into a motoring hoot. Get one while, dare we say it, they’re cheap enough to still be fun.