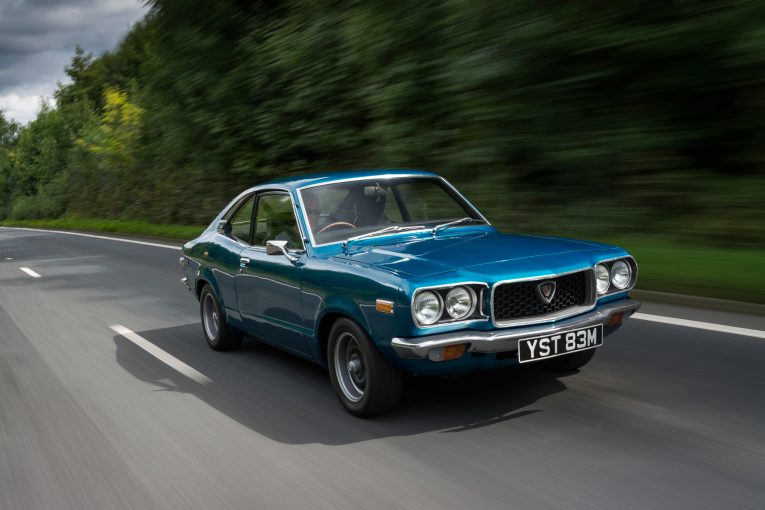 Spring 1972. The first-generation Nissan Skyline is at the peak of its powers. The all-conquering ‘Hakosuka’ is so dominant in Japanese touring car racing that it sits on the verge of scoring its 50th consecutive win. But the Skyline’s supremacy is about to come crashing down.

At the Fuji Touring Car Grand Prix in May, the new Mazda RX-3 sweeps to victory, claiming first, second and third places. It wins its class in the forerunner of the Japanese Touring Car Championship that year too. And in 1973. And again in 1975. The RX-3 also went on to pick up a string of class wins in the Bathurst 1000. In 1975, only the much-modified 5-litre Holden Toranas denied the little Mazda an outright win, after it beat a field that included BMW 2002s, Datsun 260Zs and Escort RS2000s.

So why is the RX-3 comparatively little known today? Along with modest UK sales, the answer is perhaps that it sits in the shadow of its siblings to a certain extent – the earlier and far-rarer Mazda Cosmo that kicked off the marque’s fascination with rotary engines, and the RX-7 that followed. And while the two-door coupé is now the most sought-after version of the RX-3, many were actually produced in less glamorous saloon and estate forms. Nonetheless, the RX-3 has achieved cult status. It’s also a hugely significant car in the story of Mazda – popularising the rotary engine concept that the company would champion for the next 40 years, and paving the way for the RX-7s that launched millions of Gran Turismo fantasies. It’s easy to imagine the RX-3 as a giant-killer when it starts up. This immaculate 1973 example, owned by Mazda UK, is now fitted with a slightly larger 12A rotary from the 1975 model. It’s also running on an aftermarket carburettor and exhaust, which give it a distinctly fruity soundtrack; an offbeat burble that pulses through the air like the sound of an idling speedboat.

There’s a hint of muscle car swagger to the styling too, with its chrome-rimmed grille and fastback tail. But inside it feels delicate – dainty, almost – with a large, thin-rimmed steering wheel, pencil-sized indicator stalks and a spindly gear lever. Even the handbrake feels like it was fashioned by a watchmaker. The first surprise as we pull away is how tractable the RX-3 feels. Looking at the deeply dished dials ahead, the red line sits at a comparatively ordinary 7,000rpm, so it’s not quite the screamer that you might imagine. In fact, there’s a decent spread of torque right across the rev range. The clutch is progressive, and the gearshift – although quite a long throw – engages with an oily smoothness.

I’ve been warned not to switch the engine off when I stop for photos, and there’s a faint whiff of petrol in the air, but the RX-3 feels quite civilised. The brakes take a good shove and the steering is quite high-geared by modern standards, but both seem to get better the harder you lean on them. So does the engine. At higher revs it takes on a metallic warble – a bit like a vee twin motorcycle on fast forward. The throttle response is pin sharp, while the rotary spins away with its characteristic smoothness.

In other respects, the RX-3 feels quite similar to any other compact 1970s saloon. In fact, there was even a four-cylinder piston engined version known as the Mazda 818, which went directly up against the likes of the Mk1 Escort and the Hillman Avenger. But here, the experience is totally dominated by that oddball rotary unit. It defines the RX-3’s personality every bit as much as the V8 in a Mustang or a Camaro. Clearly, I’m not the only one who thinks this. The RX-3 has always been a relatively rare sight in the UK, but despite costing a hefty £335 more, it outsold the four-cylinder 818 coupé by three-to-one over here. It probably helps that the RX-3 was in a different league when it came to performance, with the original 10A-powered car good for 0 to 60mph in 10.2 seconds, while its four-cylinder sibling took more than five seconds longer to cover the same sprint.

Globally, the RX-3 was a success, with a total of 286,757 sold between 1971 and 1978. That makes it the second best-selling rotary car of all time, behind the much longer-lived RX-7. More to the point, Mazda sold more RX-3s than every other car it had manufactured previously combined. It helped to put the Japanese brand on the map, laying the foundations for generations of sports cars to come, not to mention outright victory at Le Mans with the rotary-powered 787B in 1991.

Of course, it’s far from perfect. We won’t talk about fuel economy, rotor tip wear or hot start issues. But with its charismatic powerplant, rarity value (in the modern market) and strong performance, the RX-3 has to rank as one of the most interesting of all the go-faster saloons produced in the 1970s. Just ask the Nissan Skyline.