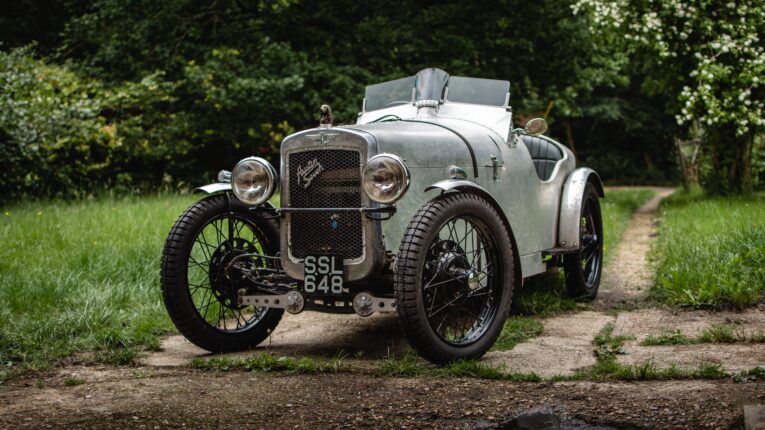 The Austin Seven is one of the few cars that can legitimately claim to have changed the course of history. Conceived as an affordable way to motorise the masses, nearly 300,000 were sold between 1922 and 1939.

For many, this humble little machine was more than a car – it was their first real taste of automotive freedom. And that’s just how company founder Herbert Austin envisaged it, when he presented the prototype in July 1922 as “a decent car for the man who, at present, can only afford a motorcycle and sidecar”. 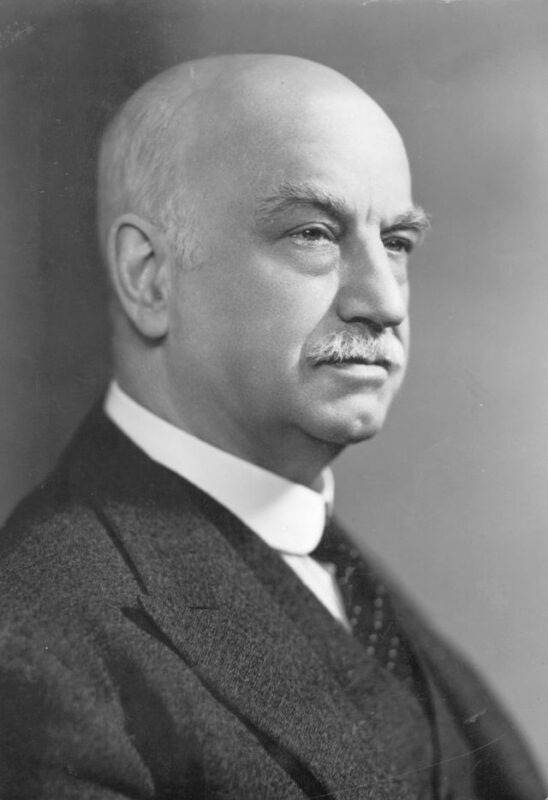 More than 30 years later, as Britain attempted to drag itself out of postwar austerity, many people were still learning to drive or embarking on their first road trip in a battered old Austin Seven. For decades, it seemed that everyone had a story to tell about these trusty little cars, whether it was taking one on honeymoon or winching it onto the roof of their university.

Even now, the Austin Seven plays an important role – providing a genuinely affordable entry into prewar motoring for a tiny fraction of the cost of the Bentleys and Bugattis that you see blasting around Goodwood.

Born on the billiard table 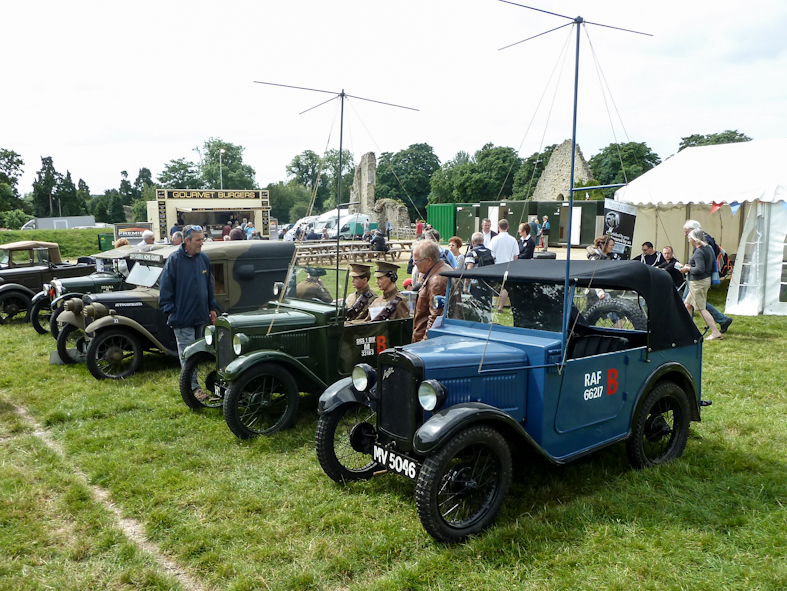 Not even Herbert Austin could have predicted the enduring appeal of the Seven when he began work on the concept 102 years ago. Having come from relatively humble beginnings, he had established one of the biggest car companies in Britain by the outbreak of the First World War. The firm grew exponentially over the next four years, building everything from fighter aircraft to heavy artillery.

After the war, though, the lucrative government contracts disappeared and Austin was left struggling to fill the giant factory he had constructed. By the summer of 1920, the receivers were closing in, but Austin believed the key to turning things around lay in a small, affordable car – quite the opposite of the grand, imposing saloons that the company was known for at the time. His fellow directors weren’t convinced, so he took to developing the car in secret.

Every night after dinner, Sir Herbert would retreat to the billiard room at his home Lickey Grange, in the Lickey hills to the south of Birmingham. There – no doubt over a brandy or two and a cigar – he would make notes and sketches for his new car. There was even a rumour that he was planning to buy the Wolseley factory at Adderley Park and strike out on his own if the board refused to back the project. 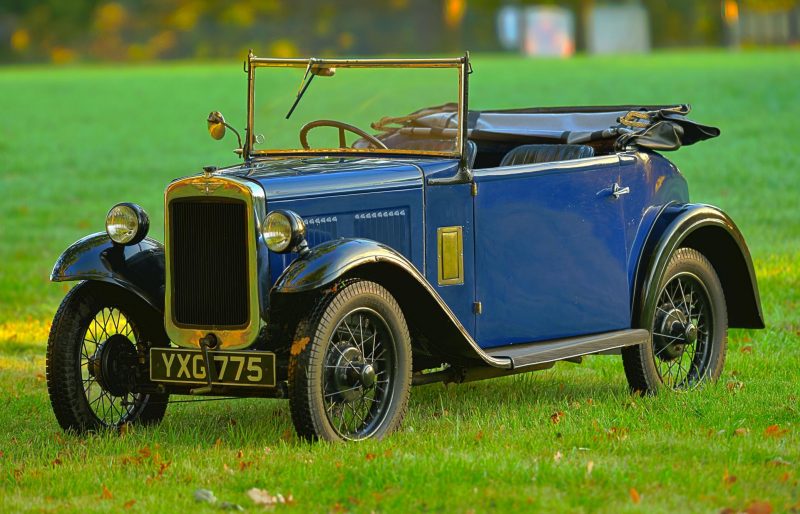 A year later, a young draughtsman from the Longbridge factory by the name of Stanley Edge was brought in to produce a set of formal drawings. He was given board and lodgings at Lickey Grange, where he worked for upwards of 12 hours a day for the next five months, fleshing out the design.

Initially, a twin-cylinder air-cooled engine was considered, and then a three-cylinder. Some unorthodox concepts were also explored, such as four wheels arranged in a diamond pattern with rear-wheel steering. But the design they eventually settled on was more conventional, and something that we’d now regard as a lot more modern.

The twin-cylinder engines found in a lot of small cars at the time produced nauseating levels of noise and vibration. Instead, Austin decided to go for a smooth and quiet four-cylinder design, displacing just 696cc in its original configuration; he put the pedals in the now familiar clutch-brake-accelerator configuration, unlike the centre throttle layout favoured at the time; and he took the revolutionary decision to put brakes on all four wheels – something that had largely been confined to racing cars up until that point. 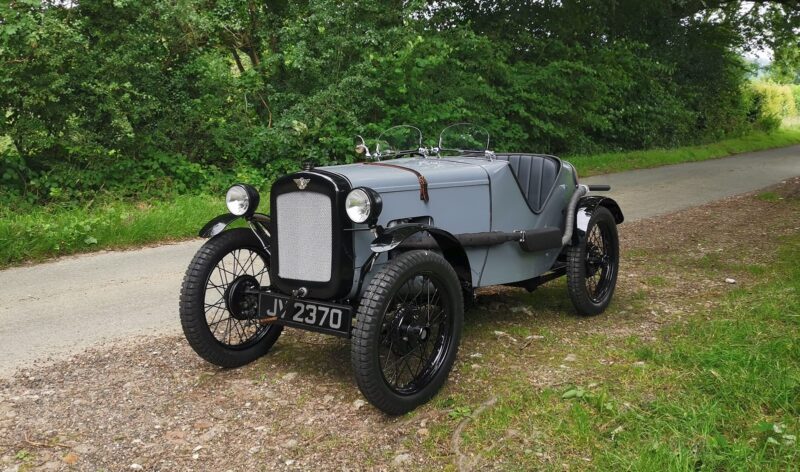 Legend has it that the Seven’s diminutive dimensions – the butt of many jokes, even at the time – came from the size of Sir Herbert’s billiard table where the initial sketches were produced. The development work progressed through 1921, and the company directors finally relented when they discovered that Austin had patented much of the design under his own name – leaving them with the choice of supporting the project or watching it be sold elsewhere.

By March 1922, the first prototype was up and running. The oldest surviving Austin Seven, OK 3537, emerged from the experimental department at Longbridge a few months later. 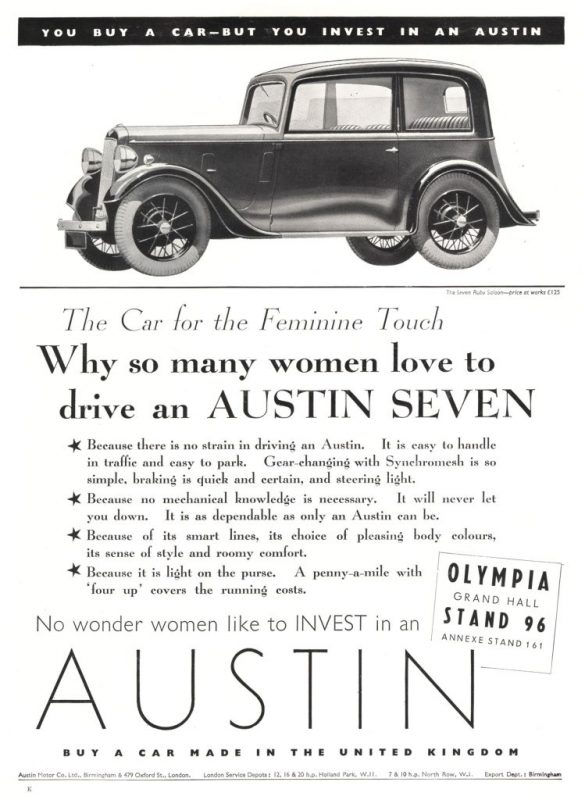 The press launch was held – somewhat grandly for a people’s car – at Claridge’s on 21st July 1922. Initially, a price of £225 had been planned, but this was slashed to £165 by the time the first cars went out to dealerships in December of that year.

A raft of evolutionary changes followed in the Seven’s remarkable 17-year production run. Notably, the bore size was increased to 2.2 inches in March 1923, giving a total displacement of 747.5cc and a heady 10.5hp in standard trim. This climbed to 16hp by the end of the Seven’s production, although sports models produced up to 33hp (supercharged). Meanwhile, coupled brakes were introduced in 1930 (previous models having used the foot brake for the rear wheels and the handbrake for the front wheels). There were also further improvements in the manufacturing process, which saw the price dip as low as £100 for the most basic model in 1931 (approximately £4,750 in today’s money). 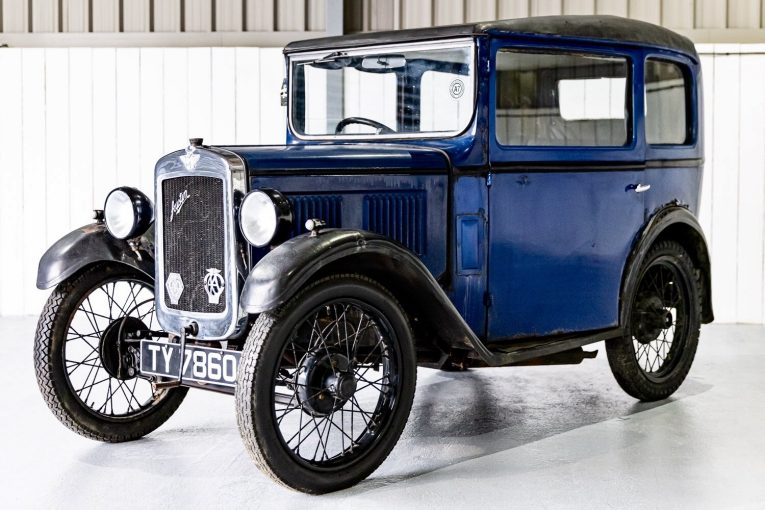 The Seven was eventually fitted with virtually every type of coachwork, from open-top tourers to vans, and even a military version. It had a long competition career too, which began just one week after the press launch when chief test driver Lou Kings took a standard prototype to Shelsley Walsh and finished third on handicap against the Bugattis and Aston Martins.

In 1928, Sir Herbert’s son-in-law Arthur Waite took outright victory at the first ever Australian Grand Prix driving a supercharged car that’s thought to have been an early prototype for the ‘Ulster’ sports model. Another production-based Seven won its class at Le Mans in 1935, by which point the works had become embroiled in a battle with MG to be the first 750cc car to hit 100mph, followed by 120mph. It was the Abingdon manufacturer that scooped both of these accolades, but Austin wasn’t far behind, setting its own records along the way, including a class record at Brooklands at an average of 122.14mph. 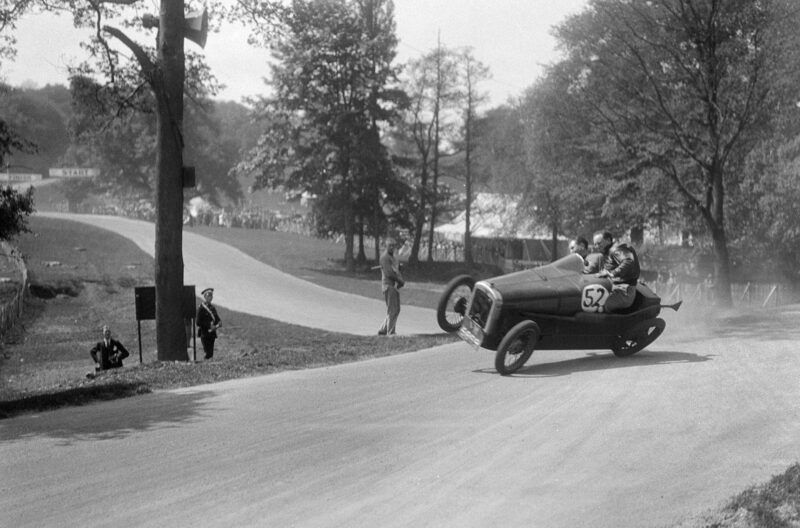 The cars used for these speed records were streamlined single seaters with engines that bore little relation to their production counterparts. In its most extreme version – heavily supercharged and fitted with twin overhead camshafts – the 750cc Austin produced a remarkable 116bhp at an even more remarkable 9,000rpm (thanks to a billet crankshaft). This, don’t forget, was in 1935.

But it was on the road – and in the showrooms – where the Austin Seven made the biggest impact. It was a huge sales success for Austin, rescuing the company that would go on to form one of the pillars of BMC, and in doing so paving the way for the next great small car to come out of Britain, the Mini. 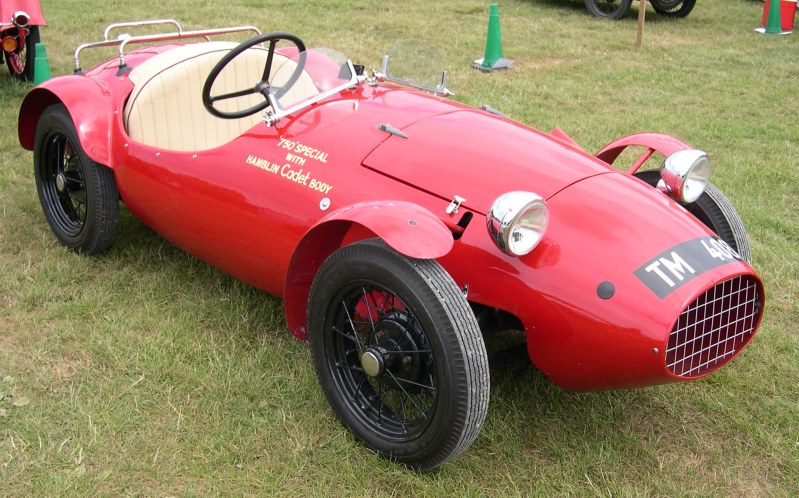 Just as significant as the Austin Seven itself were the other cars – and brands – that it spawned. The first car to come from Swallow Sidecars – the firm which would later become Jaguar – was based on the Austin Seven. So was the first BMW. Likewise, American Bantam, which is credited with the design of the Willys Jeep, started off building Austin Sevens under licence, and rumour has it that the first Datsun – ancestor of all those fire-breathing Nissan GT-Rs – was also a knock-off Seven. 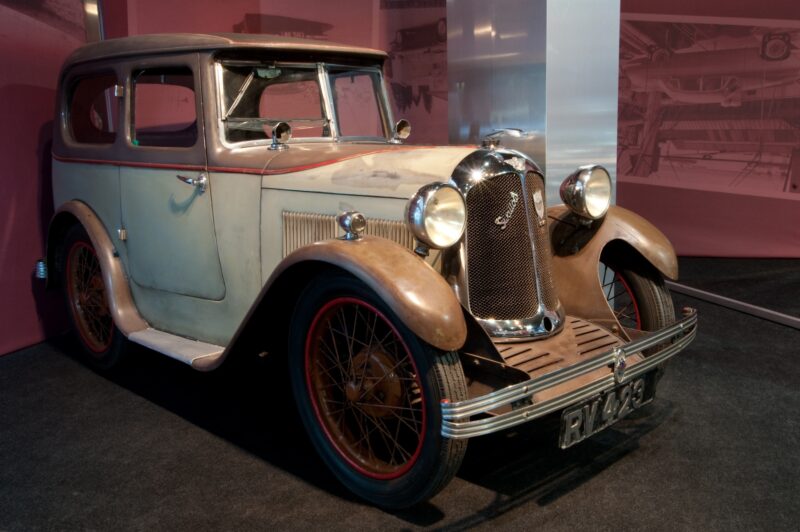 Even well after it went out of production, the baby Austin’s influence loomed large. The economic effects of the war were still being felt well into the 1950s, so enterprising young engineers set about modifying the cheap, readily-available Seven for racing.

The first car built by Bruce McLaren was an Austin Seven, as was the first Lotus built by Colin Chapman. Lola founder Eric Broadley, prolific F1 designer Tony Southgate and pioneering aerodynamicist Frank Costin cut their teeth on Austin Sevens too. They were all members of the 750 Motor Club, which later nurtured the talents of Adrian Reynard, Mike Pilbeam and Gordon Murray. Collectively, these young engineers did more to shape modern motor racing than the likes of Enzo Ferrari or Ettore Bugatti. 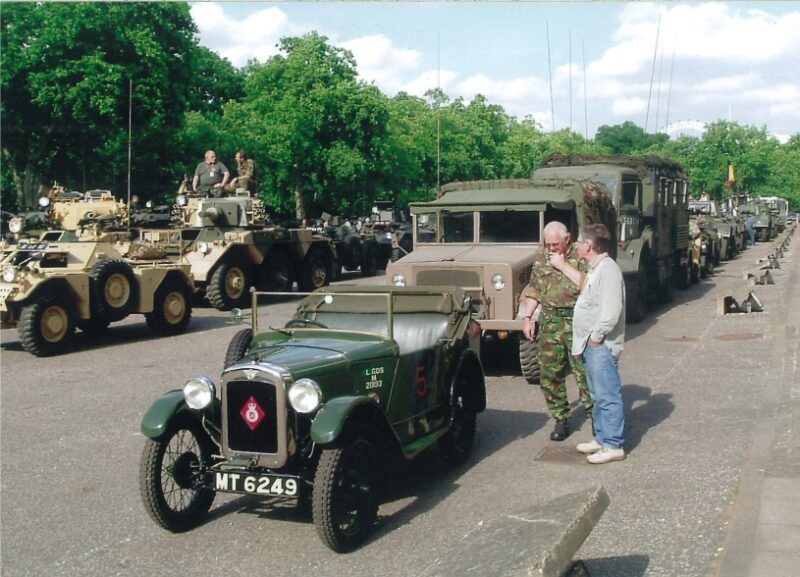 So, it’s been a cultural icon, a motor for the masses and even an influential racing car. But these days the Austin Seven is also the most affordable route into prewar car ownership. Nice saloons can be picked up for well under £10,000, with sports models starting at around £14,000.

They don’t cost the earth to run, either. Original parts are easy to come by, there’s a wealth of knowledge out there to keep things ticking over, and they do 40-odd miles to the gallon. All of which means that the Austin Seven is easier and cheaper to live with than a lot of far more recent classics.

As with all old cars, the driving experience depends on condition and specification as much as anything else. Find a good one, and it can be surprisingly modern in some respects. True, the brakes are a bit marginal and progress is pretty sedate, but the steering is sharp and the motorbike-sized four-cylinder is quite eager to rev. Being so light, it’s possible to tune the sports models to a power-to-weight ratio of around 100hp/tonne – similar to an MGB or a Triumph Spitfire – and enough to feel pretty terrifying in something the size of a bath tub, with roughly the same braking capability. 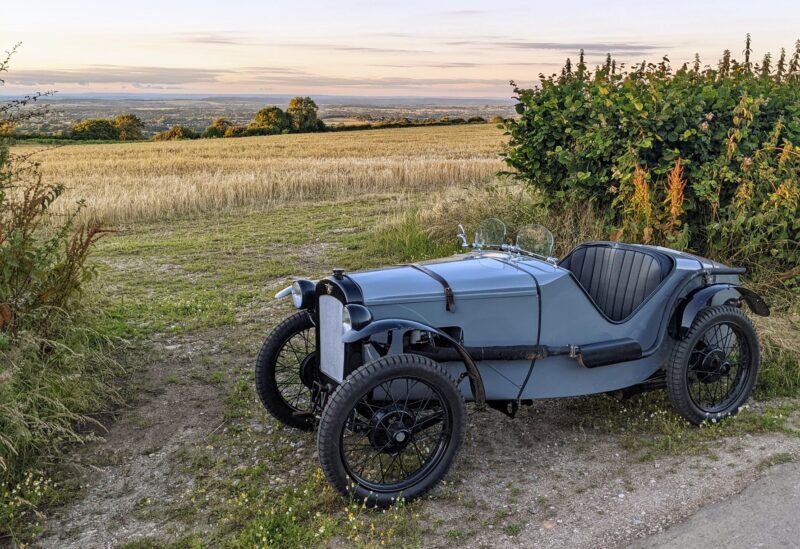 And perhaps more than any other car, the combination of the Austin Seven’s antiquated age, its diminutive stature and its sheer cuteness seems to guarantee smiles from everyone you meet. They’re the sort of classless icon that you’re equally likely to find in a single lock-up or tucked away in a vast collection of priceless exotica. And if you’re quick there’s still just about time to get one before the centenary celebrations kick off later this month, celebrating 100 years of the car that got Britain moving.