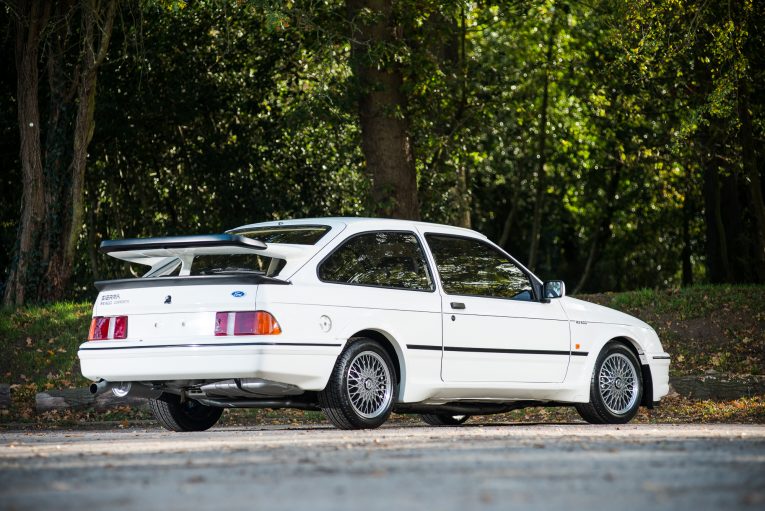 When Ford released the Sierra RS Cosworth in 1985, we all fell off our chairs. The ‘80s were a time of excess, a time of ‘loadsamoney’ and a time for being big, being brash and being loud. But the RS Cosworth, man alive, that took the idea and ran with it. We’d only just started to bond with the Sierra by 1985, with many refusing to accept its curvy, futuristic looks over those of the trusty Cortina it replaced. We were still adapting, still coming to terms with it, and then bam, the Cosworth strode in with its flared arches, its bonnet vents and its completely bonkers rear ‘whale tail’ spoiler. We were gobsmacked. But very quickly, we were in love.

The RS Cosworth was Ford’s solution to a big problem, and that was its falling success in motorsport. While the man on the street still loved the Cortina, the reality was that the man on the track didn’t find it competitive. Ford needed something else, and the Sierra was the perfect base on which to build a motorsport icon. The project was spearheaded by Stuart Turner, with the full support of Walter Hayes. Hayes was the VP for PR at Ford at the time, and he had also been instrumental in the development of the GT40. He could see the importance of such a project, and so he green-lit it without hesitation. Ford then went to its long-time engine partner, Cosworth, and asked what it could offer the project. Cosworth had a think and then decided that the best way to go would be to bolt a twin-cam, 16-valve head and a thumping great turbo onto a T88 block. That’s a Pinto to you and me.

Cosworth then put the arm hold on Ford by setting out some ground rules. Whilst Ford wanted the road cars to be around 180bhp, Cosworth would only offer the engines with 204bhp. Ford only needed 5,000 engines. Cosworth said no, and insisted it needed Ford to place an order for 15,000 if it was to go ahead. Ford, amazingly, said yes. With the engine sorted, Ford needed a car to put it in. Being the newest on the showroom floor, and thanks to being a rear-wheel-drive, the Sierra fit the bill. It was modern, it was sleek, and it was ripe for more power. It was a bold move though, because as we mentioned earlier, as a car-buying public, we hadn’t exactly welcomed the Sierra with open arms. Yet still, Ford pressed on and put the performance Sierra into development.

That development saw the car grow. A three-door XR4i body had been used, and through wind tunnel testing as well as on-track testing, it had become apparent the Slippery shape of the Sierra was somewhat unstable at speed. As such, it developed a huge rear wing, which lead designer, Lothar Pinske, insisted on as it kept the car stable at over 300kmh. He also insisted on the wide arch extensions. Not entirely necessary on the road car, they were absolutely necessary on any proposed race versions in order to house the 10-inch wide tyres. Ford wasn’t sold on the look of the thing, but it conceded that Pinske was correct, so the alterations would stay. When the final design was reached, Turner and Hayes were worried. Ford needed to sell 5,000 RS Cosworths in order to attain Group A homologation. Dealers were less than enthusiastic about the car, with many saying they’d struggle to sell a fifth of that. Hayes wasn’t to be deterred and he pushed on with the project and made it his mission to get as many people driving the RS Cosworth as possible, and when they did, things changed. The RS Cosworth was an instant hit. It was wild, it was fast, it was like nothing else on the road. It took the car we had yet to fall in love with and made it an instant poster child for performance Fords.

Ford wasn’t done yet. The RS Cosworth was impressive, but to be truly competitive in the British Touring Car Championship it needed even more bark. Ford needed to up the RS Cosworth, and it did. The RS500 was born. The RS500 took the standard Cosworth and turned it up to eleven. Ford only needed to build and sell 500 for homologation purposes. This relatively small number meant Ford could pull all the stops out and develop a car with one thing in mind and one thing only – racing. The RS500 was built with very little consideration for the man who would drive it on the road. In fact, it wasn’t even that much more powerful, with around 20bhp more. However, built into the RS500 was a whole host of goodies that would mean Ford could legitimately go nuts on the track. As such, the RS500 featured an engine with thicker and more durable cylinder walls, a bigger T04 turbocharger was fitted as was a larger air-to-air intercooler, the oil cooling system was upgraded, the fuel pump was upgraded, and the induction system was reworked. All things that, on the road, made little difference. But that didn’t matter, because, on the race version, these changes would be the legitimate foundation for better performance. The biggest liberty Ford took on the RS500 was the injectors. Never before and never since have you been able to buy a car in which 50% of its injectors weren’t actually connected to anything. Yes, the RS500 had eight injectors. But only four of them actually did any work. But, because the 500 homologated cars had them, so too could the race car. Though of course, they we hooked up when on track. Sneaky.

For the road cars, the work was done by Aston Martin Tickford who had form with Ford having worked on the RS200 and also the Tickford Capri. The right company for the job, they built all 500 cars, fitting the engines and also the visual additions like the lower rear lip spoiler and the redesigned rear bumper. The RS500 in race trim was nothing short of an animal. Packing 500bhp in most cases, though history states that some cars may have been closer to 600bhp. It had more turbo lag than was fathomable, but when it was up there, on the limit, turbo spinning, it was an epic force. It was a handful, being only rear-wheel-drive, but for those who mastered it, the rewards were plentiful. The RS500 won forty races. In succession. Four. Zero. No other manufacturer saw the top of the podium for a long, long time. And all because Ford re-engineered the RS Cosworth into the RS500. Of course, since those heady days, the RS500 has become a holy grail machine for Ford fanatics the world over, despite the fact it was only ever built in RHD UK specification. And as you’d expect from Ford enthusiasts, almost all of them now have all eight injectors hooked up, even though they’re on the road. But we’re sure Ford never intended for that to happen, no sir, not at all.