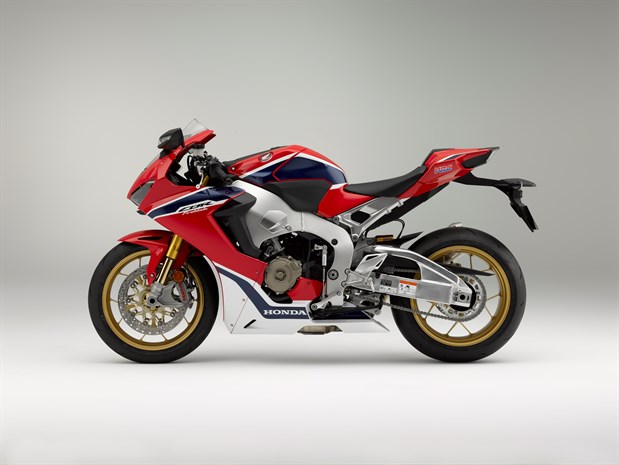 There have been many motorcycles in the years since the first powered bicycle emerged in the late 1800s and, in that time, only a few have been truly deserving of the term ‘Legend’. However, when it comes to the litre-class sportsbikes (with engine capacity around 1000cc), there is one that springs to mind; the Honda Fireblade or, to give it its proper name, the CBR900RR and latterly, the CBR1000RR. The Blade re-defined the sportsbike genre – and helped create the superbike one – with racetrack handling and performance combined with accessibility and usability for the road. A measure of its longevity and the love for the model is that, almost 30 year since the first Blade was launched, Honda is still developing the Blade and introducing new models.

The Fireblade’s story begins in the late 1980s, when sportsbikes were becoming fast but generally, only in a straight line. Honda wanted a new model, so engineer Tadoa Baba was tasked with designing it. The original thinking was to make it 750cc, as was the general trend at the time but Baba realised that he could extend the stroke of the company’s 750cc motor to give 893cc and squeeze that into the narrow, lightweight 750-based frame he was working on.

The result was the 1992 CBR900RR FireBlade, the name apparently coming from erroneous translations from Japanese to English of ‘lightning’, via a couple of other languages on the way. Whatever the route, the name stuck and the new bike celebrated Baba-san’s concept of mass centralisation, low weight and providing the rider with a bike that not only performed well but also responded to inputs. The original RR re-defined the sportsbike genre overnight, with it’s large twin round headlights and aggressive bodywork reminiscent of the racers of the day. Performance was exceptional, better than the then-standard 750cc default sportsbikes, with 120bhp claimed from the quad-carbureted engine and, with a weight of just 183kg and dimensions closer to a 600cc sportsbike, it was a joy to ride – and ride fast. It wasn’t long before every budding racer was hanging off the bodywork, trying to drag their knees, toes and elbows on British tarmac just like their heroes.

Two years later, the bike’s evolution began with the RR-R/S version, incorporating some minor changes to the engine, resulting in an imperceptible 2bhp gain but more importantly, the forks gained compression damping in an attempt to stabilise the bike’s flighty front end. There were also small changes to the fairing, including what many called the ‘Foxeye’ headlights. The ‘Urban tiger’ colour scheme – of orange and black – also became available for the first time.

There were more tweaks to come; in 1996, the RR-T/V got a slightly larger engine – up to 918cc and a bit more power, to 128bhp. However, the engineers had also changed the ergonomics. A new seat and fuel-tank design meant the rider was sat more upright and, as a result, many felt the bike had lost a little of its edge, its rawness. By 1998, the competition had caught up; Yamaha had introduced the R1, a 150bhp bike with handling to match and which had stolen the Blade’s thunder. The latest version of Honda’s offering, the RR-W/X was no slouch – its power too had grown, to 130bhp, but the bike was, by now, a softer version of its former self and this proved to be the least popular model in the Blade’s evolution.

So it was back to the drawing board for Baba and his team for the 2000 model, to take the fight back to Yamaha and the R1. And boy, did they deliver. The all-new Blade used a 929c four-cylinder motor but for the first time, fuel injection to bring power up to 148bhp and deliver smooth and accurate fuelling. Front suspension changed to upside-down forks (where the damping units were fixed to the bike, at the top of the leg) to reduce unsprung mass and improve suspension response. The original bike’s 16-inch front wheel was also changed for a 17in version. The result was again a huge step forward from the predecessor, with nimble and precise handling that worked superbly on the road as well as the track. However, though it led the field, the competition wasn’t far behind and Suzuki introduced the GSX-R1000, spurring Honda on to yet another Blade in 2002. This would be the last created by Baba-san and, as a mark of recognition, the last to feature the upper-case ‘B’ in FireBlade. Dubbed the ‘954’, capacity grew to – you guessed it – 954cc and with it, power to the magical 150bhp mark. There were updates to the bodywork and the bike remained sharp and precise to ride, becoming one of the most popular iterations of the Blade.

In 2004, the Fireblade went through another complete redesign; the CBR900RR became the CBR1000RR, as the bike was new from the ground up. Partly intended to provide a base for the 1000cc-class in World Superbike racing and partly for the road, a new 998cc engine developed 170bhp and was fitted into a chassis bred from Honda’s MotoGP racer by the works team. The rear swingarm was elongated to help with traction, the exhausts moved from low-down to under the seat and the front brake calipers were mounted radially, as per the race bikes. The styling was by now much more angular than its predecessors and though it was the best Blade to date, it was facing stiff competition from the other Japanese manufacturers. In 2006, the eighth-generation Blade added a few minor engine modifications for a smidge more power and on the road, the bike was still a great hit. However, on the track, things weren’t quite so rosy with Honda struggling to achieve the success it wanted, though it did manage to snap up the World SuperBike title in 2007.

There was another all-new model introduced in 2008, the CBR1000RR-8. Developed under the stewardship of engineer Kyoichi Yoshii, the concept was to return the Blade to its original ideal of low weight and good power without introducing insulating electronic assists. This version is easily identified by new bodywork and the return to low-mounted exhausts and it kept the 998cc inline four, though by now, power was up to 175bhp. It also got new, more rigid and responsive monoblock front-brake calipers for improved stopping power and feel a year later, it was also fitted with Honda’s C-ABS or Combined ABS.

In 2012, 20 years on from the debut of the original, the Blade was joined by the SP – or Special Production – variant. The base model was by now fitted with Showa ‘Big Piston’ forks, giving improved damping response and lighter alloy wheels. The SP was fitted with Ohlins dampers front and rear and Brembo brake calipers were also fitted. The SP was some £3000 dearer than the base model but that’s the price you pay for premium performance components. By this point, the Blade was beginning to feel a little behind the times and so Honda went for yet another ground-up redesign in 2017 with three models available; the base RR, the uprated SP and the homologation special, the SP2. The engine was still a 998cc inline four but by now produced 189bhp at an ear-splitting 12,500rpm. The base bike used Kyaba suspension and Tokico suspension while the SP used semi-active Ohlins dampers and Brembo brakes, like the previous SP. However, what set this model apart from its predecessors was electronic control.

This was the first Blade to use a ride-by-wire throttle and this, in conjunction with a five-axis Inertial Measurement Unit (IMU) that knew whether a bike was leaning or pitching forwards or backwards, meant that the bike could theoretically use as much of of its engine or braking power as the tyres could handle at any given time. There was nine-level traction control, wheelie control, three rider modes, five levels of engine power and three levels of engine braking to prevent rear-wheel lock-ups. For most road riders, the bike was a return to form; it handled well, the engine was superb and the range of aids, once the manual had been digested, was generally useful. It wasn’t perfect but it was well on the way. The SP2 version had a less successful start though, largely off the back of a disastrous outing at the Isle of Man TT, where Guy Martin and John McGuiness both had what can only be described as a nightmare; McGuinness crashed following a technical issue on the North West 200 in the run-up to the TT and could not compete and Martin also crashed in the TT Superbike race when the bike selected neutral instead of a gear. He eventually withdrew from the remaining races with an injured wrist.

For 2020, there was another Fireblade but this one moved farther away from the road than ever before. The bike still has a four-pot motor, now based on the MotoGP engine and breaching the 200bhp barrier with 215bhp horses, though this occurs at 14,500rpm. It still had an impressive suite of electronics, now based on a six-axis IMU instead of the previous five-axis one. Suspension on the base model was firm, though the SP with its electronically controlled damping was more compliant for the road. Bodywork is also new, with MotoGP-inspired wings to help stabilise the front end. So, on paper, it’s the most advanced Fireblade yet. But on the road, it simply doesn’t add up. The previous bikes’ glorious midrange performance is now gone, replaced with a cacophony of throttle and revs – the big-bore, short stroke engine needs to get towards five figures before much happens. Sure, when it does it really happens but this means that by the time you’re making the most of it, you’re probably going too fast to even think lucidly. The latest Blade has lost what made it so successful; road relevance. Regardless of its place in relation to its peers, it was first and foremost a road bike and it worked on the roads. Sure, it worked just as well on a racetrack if you were lucky enough to be able to take it there but if not, you could still get your kicks on the Queen’s Highway. This latest version has lost its way and while it is a fearsome track weapon, it’s not the glorious Fireblade of old.